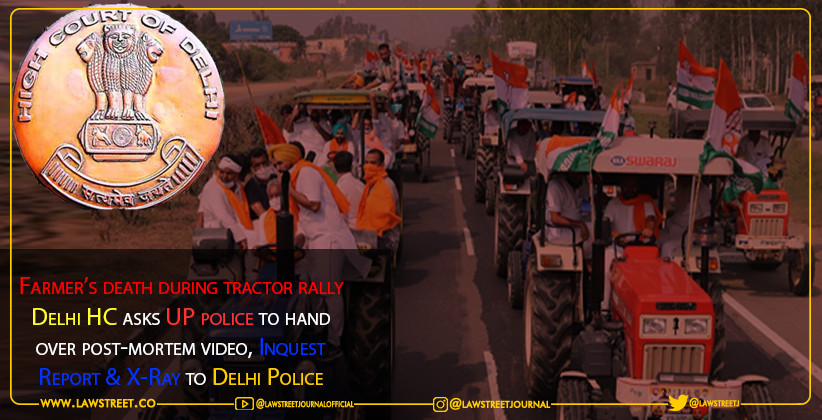 The Delhi High Court on Thursday ( March 4, 2021) was hearing a petition filed by the grandfather of a 26-year old farmer, Navreet Singh, who died during the tractors rally on the Republican Day Tractor Parade in the capital city wherein it directed UP authorities to handover original X-ray plates and video of the post-mortem of Navreet to Delhi Police on Friday afternoon. It further asked Delhi Police to retain them in safe custody till further orders.

Allegation of the parties:

The Police said Navreet died when his tractor overturned after it rammed a barrier at ITO and not because of firing. It has also been said that he was part of a large group of farmers that broke away from the tractor rally and were trying to go towards New Delhi district.

On the other hand, A petition filed by his grandfather Hardeep Singh alleges that Navreet's tractor overturned only after he suffered an ante-mortem head injury due to a bullet shot on the head by the police.

Standing Counsel Rahul Mehra on behalf of police informed the court that the status report has been filed in the matter. He also said that following the previous order he had made several request to the UP police but they hadn’t handed over the relevant reports.

Advocate Vrinda Grover, appearing for the petitioner agreed with him and claimed that it was due to the non-cooperation of the police that a notice under Section 91, CrPC had to be issued by the Delhi Police.

Appearing for UP Police and the Chief Medical Officer, Standing Counsel Garima Prashad, however vehemently denied this claim and said:

“We are ready and willing anytime to provide and have provided the inquest report, and post mortem report already.”

“The Delhi Police sent the body to us and we conducted an emergency post mortem at 2 am. We have provided all possible assistance,” she further said.

Again on Advocate Vrinda Grover arguing that the post-mortem report and video constitute Crucial evidence in the case and were required by the family to arrive at any conclusion, advocate Prasad said:

There was only a refusal so far as handing over is concerned. There was no refusal for production. If appropriate orders are passed, we have no objection to handing over.”

The Court taking into account the facts that the Chief Medical Officer (CMO) and the SP had refused to provide the post-mortem video without an order and that the UP police had stated that there was no X-Ray report available with them, it was directed to UP Police to handover the relevant reports to the Investigating Officer of the case next day.

The matter was heard by Justice Yogesh Khanna and it will next be heard on 17th March.