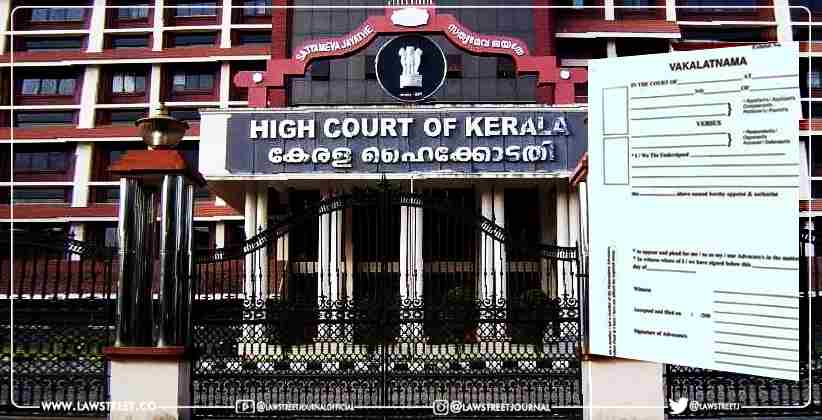 The Kerala High Court on 29th March 2022 ruled that once a client authorises an advocate to conduct a case, the advocate is empowered to file a joint vakalat on behalf of them.

Justice N. Nagaresh added that filing a joint vakalat is not a ground to deny any lawyer his professional fee.

"The said authorisation would include authorisation to do all that is necessary to conduct and prosecute the case, including filing joint Vakalat along with junior lawyer in the office of the senior lawyer

Any senior lawyer having briefs of various clients cannot effectively prosecute or defend cases without the assistance of junior or other lawyers. When a client authorises an Advocate to conduct or prosecute a case, the authority given is to conduct/prosecute the case effectively and the Advocate is empowered to file joint Vakalat for and on behalf of the client. There is no illegality in filing a joint Vakalat... The respondent cannot deny fees if any due to the petitioner on that ground."

The plea was moved by a practising advocate seeking a direction to the Airport Director, Airport Authority of India (AAI) to pay him his professional fees amounting to ₹3,37,514/- as certified by the Sub Court, within a time frame.

The petitioner appeared for AAI before the Sub Court and the suit was decreed in June 2015. However, when he sent a bill of professional charges, he was allegedly informed that it can be settled after realisation of the money through Execution Proceedings.

Although he argued that payment of the Advocate Fee cannot be on the basis of the outcome of the litigation, the respondent only transferred ₹15,000/- to the petitioner's account claiming it to be as per the then prevailing panel advocate fee. AAI declared that it will pay the court determined advocate fee after the recovery/realisation of the amount from the judgment debtor.

Following this, he sent a lawyer notice demanding the remaining amount but to no avail.

The respondent opposed the writ petition arguing that it is not maintainable since there is no violation of any legal or constitutional right. Further, it was alleged that although only the petitioner was engaged to prosecute the suit, he filed a joint Vakalat along with one Advocate Mini Mathew without the AAI's knowledge or consent. The statement of costs of the petitioner certified that he had received the senior and junior fee.

On these grounds, the Authority claimed that they had no liability to pay.

The Court found that the Vakalat executed by the respondent authorises the petitioner to conduct and prosecute the case, which includes seeking the assistance of a junior lawyer from his office.

"The said authorisation would include authorisation to do all that is necessary to conduct and prosecute the case, including filing joint Vakalat along with junior lawyer in the office of the senior lawyer."

Justice Nagaresh also held that if in the Statement of costs, the legal fee payable was decided without consulting the client or without any agreement, the client may not be legally bound to pay the said legal fee. However, it was clarified that the certification of receipt of fee by the counsel will not disentitle them to receive due fees.

Noting that the respondent had paid only ₹15,000/- to the petitioner towards the Advocate Fee, AAI was directed to clear the outstanding dues. Since there was no express agreement on the fee payable, the respondent was liable to pay the fee prescribed in the appropriate Rules.

Why No Action Against Accounts Posting Objectionable Content About Hindu Gods And Goddesses: Delhi High Court To Twitter