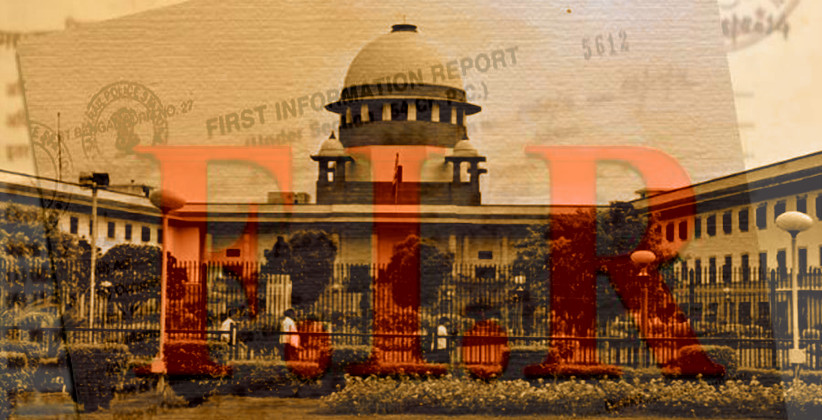 Judiciary Aug 21, 2019 Lawstreet News Network 2 Shares
2 Shares
The Supreme Court on August 19, 2019, in the case of Saleem Ahmed v. State & Anr., has held that FIR cannot be lodged after the dispute is fully settled in Lok Adalat.

The Bench comprising of Justice Abhay Manohar Sapre and Justice R. Subhash Reddy was hearing an appeal filed against the judgment passed by the Delhi High Court wherein it had dismissed the petition filed by the appellant. In this case, the officials of the Enforcement Department of BSES Rajdhani Power inspected the electricity meter installed in the house of the appellant and found that the meter was not recording correct reading. The BSES made assessment in relation to the consumption of the electricity and sent a bill for theft for Rs. 97,786 to the appellant.

Later, when the matter was referred to Lok Adalat the case was settled at Rs.83,120 against full and final payment of the bill of Rs.97,786. However, despite settlement of the case and receiving the payment, the BSES filed an FIR against the appellant under Section 135 of the Electricity Act, 2003. The Delhi High Court dismissed the appellant’s petition seeking to quash FIR. In appeal, the Supreme Court Bench observed that, once the dispute in relation to recovery of outstanding amount was finally settled between the parties amicably in Lok Adalat resulting in passing of the award in full and final satisfaction of the entire claim, there was neither any occasion and nor any basis to file FIR by the BSES in respect of the cause which was subject matter of an award. “The remedy of the parties in such a case was only to challenge the award in appropriate forum in case they felt aggrieved by the award. .. In our opinion, the effect of passing of an award was that dispute in relation to the demand raised by the BSES was settled amicably between the parties leaving no dispute surviving,” the Bench said. The Bench also noted that the conditions set out in the award, in clear terms, record that the dispute has been settled in full and final satisfaction of the demand in question. “In our view, if the BSES was so keen to file FIR against the appellant under the Electricity Act then either they should not have settled the matter through Lok Adalat or while settling should have put a condition in the award reserving therein their right to file FIR notwithstanding settlement of the dispute in question. This was, however, not done,” the Bench observed. Thus allowing the appeal and quashing the FIR, the Bench held that the filing of FIR after passing of the award by the Lok Adalat was wholly unjust and illegal and the same was not permissible being against the terms of the award and also for want of any subsisting cause of action arising out of demand. [Read Judgment]