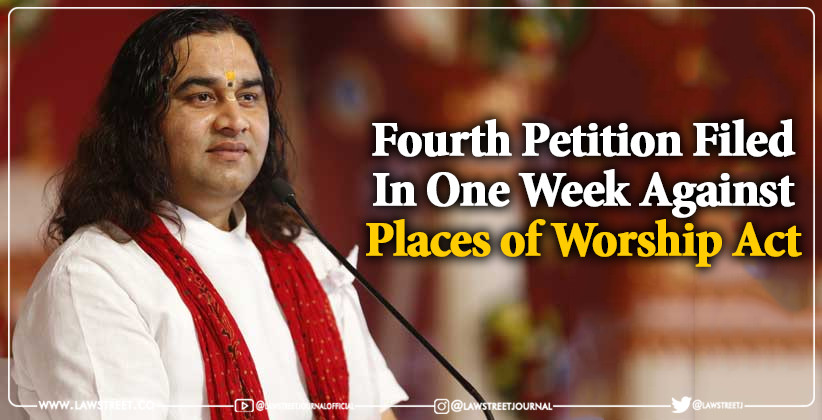 A Public Interest Litigation (PIL) has been filed in the Supreme Court by Dharma Guru Devkinandan Thakur Ji to challenge the validity of Sections 2, 3, 4 of the Places of Worship (Special Provisions) Act 1991, which not only offends Articles 14, 15, 21, 25, 26, 29 but also violates the principles of secularism, which is an integral part of the Preamble and basic structure of the Constitution.

Recently, a flurry of petitions have been filed in the Apex Court challenging the Places of Worship Act. A fourth petition has been filed in one week. Now Dharma Guru Devkinandan Thakur has reached out to the Supreme Court against the Places of Worship Act challenging its constitutionality and claiming it to be void. The PIL has been filed through Advocate-on-Record Ashutosh Dubey on behalf of the petitioner. So far, a total of seven petitions have been filed.

The Ministry of Home Affairs, Ministry of Law and Justice and Ministry of Culture have been made respondents in the said petition.

In a PIL filed by Adv. Ashwini Upadhyay against the Places of Worship Act 1991, notice was issued by the Supreme Court to the Government on March 12, 2021, however, the government has till date not filed a reply.

According to the petition filed on behalf of Dharm Guru Devkinandan Thakur, maxim "Ubi Jus Ibi Remedium" has been frustrated by the 1991 Act in pending suit, in which cause of action has arisen or continue and the remedy available to aggrieved person through court has been abolished thus violating the concept of justice and Rule of Law, which is core of Article 14.

The Petitioner challenges the constitutional validity of the Places of Worship (Special Provisions) Act 1991 as it is void and unconstitutional. The Act has been enacted in the garb of ‘Public order’,

The PIL further states that,

Claiming the Places of Worship Act, 1991 as Void and Unconstitutional, the present petition has been filed by petitioner Dharma Guru Devkinandan Thakur, through Advocate Ashutosh Dubey, AOR.