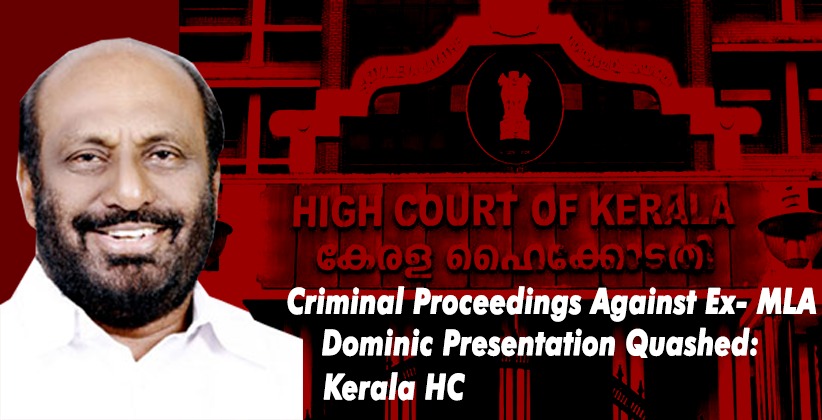 The Kerala High Court has quashed a criminal complaint against former Ernakulam MLA Dominic Presentation for leading a human rights protection procession in 2017.

In the case of Dominic Presentation v. State of Kerala Single Bench of Justice M.R Anitha exonerated him of wrongdoing, holding that peaceful, non-violent protests are protected by the Constitution.

The High Court said, "In the particular fact situation of this case there is nothing to show from the records produced that the procession led had become disorderly or noisy. In other words, it appears to be a peaceful and non-violent procession led by the petitioner and others. Hence their acts are well protected under Article 19(1) (a) and 19(1)(b) of the Constitution of India,"

The then-President of the Kerala Chapter of the Congress Party VM Sudheeran had called for a procession to protest the arrest of two Dalit girls in Thalassery.

Dominic Presentation and four others led a procession of almost 200 people in the Ernakulam district and were booked for causing obstruction to the general public and vehicles, and for being part of an unlawful assembly under sections 143, 147, 283 read with 149 of the Indian Penal Code.

The former MLA argued that the assembly they had formed could hardly be characterized as an unlawful assembly since they had no intention to use criminal force for the purpose of overawing, resisting the execution of the law, committing a crime, or compelling a person to do an illegal act.

Apart from this petitioner’s counsel submitted that the independent witness arrayed, as well the witnessing police officers only made general statements.

No disorderly, unruly behavior or specific instance of obstruction of traffic or persons was demonstrated, he additionally contended.

Therefore, it could not be said that the procession caused an obstruction.

The Prosecution argued that the procession was one that attracted restrictions under Article 19(2) of the Constitution because it disturbed public order.

Accepting the petitioner's stance, the Court found his procession as constitutionally protected under Article 19(1) (a).

Justice Anitha went on to emphasize that all processions or marches were not to be similarly treated but that it would have to be viewed in the light of its own facts.

From the material produced, there was nothing to show that the procession, in this case, had turned violent or disorderly.

Some meetings may be peaceful in the beginning and subsequently may turn violent. Soblanket protection cannot be given to all processions or marches under the guise of freedom of speech and expression and peaceful assemblyunder Article 19(1)(a) and (1)(b) of the Constitution. Each case has to be examined based on its own facts", reads the High Court order.

The case was thus disposed of.