Gujarat High Court: ‘It is mandatory to make the choice of health over religion’; Court shows disappointment in State Government for appeasement [READ JUDGMENT] 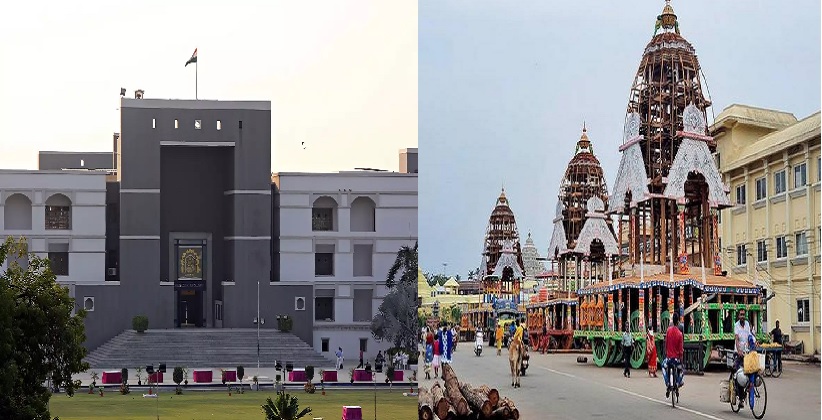 The Gujarat High Court while disposing of a petition related to restriction on the Lord Jagannath Rath Yatra said ‘It is mandatory to make the choice of health over religion.’

The bench comprising of Chief Justice Vikram Nath and Justice JB Pardiwala observed that the state must provide legal safeguards to protect an individual’s life and to maintain the good health of the community.

Last month, the court in an interim order directed that there shall be no Rath Yatra carried out this year in Ahmedabad and any other district in Gujarat. The court directed the Government to file an affidavit on this issue.

The court said that the Government has chosen to follow a policy of appeasement and coaxing to convince the religious leaders, Temple authorities, and organizers connected with Jagannath Rath Yatra to avoid holding the Rath Yatra processions. It observed:

“However, what was disappointing was the passive and yielding approach of the State Government. As a secular body heading the fight against COVID 19 in the state, the Government's main focus should be protecting the health and wellbeing of the people at all costs, even if it means hurting the religious sentiments of some religious leaders. With infection rates going up and our resources gradually depleting, it is mandatory to focus on health rather than religious.”

“During the pandemic, we do not have time for blandishment. We need action. Strong, pragmatic, and robust action.”, it further added.

The court further observed that they cannot and should not follow the policy of appeasing the cultural and religious heads. It stated:

“We are treading on thin ice just now. In the absence of an effective vaccine, social distancing has become the principal policy mechanism for suppressing the spread of the virus. This is certainly not the time to shy away from the truth and our responsibilities. For a Government to function effectively during the pandemic it is paramount to have a clear list of priorities in order to made decisions quickly and effectively. Hard choices need to be made, never more so than during a crisis and it is most important to keep those choices or priorities, hyper clear. Providing unclear and contradictory priorities to the people will in turn lead to more trouble.”

“Gujarat is a state where we have occasions to celebrate every other weekend. While it is emotional to see these cultural festivals not being celebrated, there is nothing more important than the safety and health of our people. The government cannot and should not follow a policy of appeasing the cultural and religious heads. This is not the time to sit, negotiate, and persuade. A policy of appeasement sends out a very wrong message to the public. If the government remains nonchalant on the issue of religious gatherings, this will have a serious impact on how seriously the masses take the pandemic. They too may become increasingly relaxed and easy-going, while indulging in gatherings that flout the social distancing norms,” the court further remarked.

The court also said that passing an interim order on the date of Rath Yatra avoided a major catastrophe that could have derailed the State Governments efforts fight against COVID 19:

“The emotional, social, and economic cost of the loss of lives of the common men, following major public gatherings would have been devastating. The support and understanding shown by the masses were commendable. Despite having their religious sentiments hurt, most people correctly understood the public health and concerns behind the cancellation of the age-old Rath Yatra.”

While disposing of the petition the court said the decision whether the Rath Yatra should be permitted not is on the State Government to decide. This matter should not have come to this High Court. It added:

“We have still a long long way to go before the battle against the COVID 19 is won and over. In such critical times, there is no need to consult or discuss anything relating to the religious practices with the religious leaders, etc. at the cost of public health. We emphasize the need to prioritize the protection of public health over religious expression.”

The judgment began with the quote “No man is above the law and no man is below it, nor we ask any man’s permission when we ask him to obey it. Obedience to the law is demanded as a right; not asked as a favor.” By Theodore Roosevelt.

The court concluded the judgment by the quoting Justice Rose Bird, the Former Chief Justice of the State of California, U.S.A “The judiciary must not take on the coloration of whatever may be popular at the moment. We are guardians of rights, and we have to tell people things they often do not like to hear.”

Low Revenue is no reason for not deploying funds for salaries: Delhi High Court to AAP Government