Home Judiciary 'How Can Highways be Blocked Perpetually? Redressal Can be Through Judicial Forum or Parliamentary Debates': Supreme Court on Farmers Protests
Judiciary

'How Can Highways be Blocked Perpetually? Redressal Can be Through Judicial Forum or Parliamentary Debates': Supreme Court on Farmers Protests 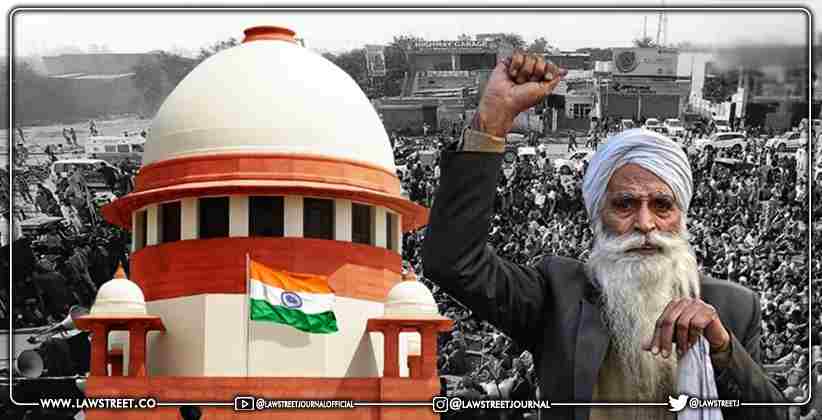 The Supreme Court issued oral remarks on Thursday (September 30, 2021) condemning the road blockade in the Delhi-NCR region as part of the farmers' protests against the three contentious farm laws passed last year.

While hearing a PIL filed by a Noida resident, Monicca Agarwal, who complained about delays in her daily commute caused by the roadblockade, a bench led by Justice Sanjay Kishan Kaul stated that highways cannot be closed indefinitely. The judge suggested that the issues be resolved through judicial forums or legislative debates.

"Redressal can be sought through judicial forum agitation or parliamentary debates, but highways cannot be blocked indefinitely," Justice Kaul observed.

Justice Kaul told the Union of India, Haryana, Uttar Pradesh, and Delhi governments that the Supreme Court had already established the law and that it was now up to the executive to put it into effect. It should be noted that a bench led by Justice Kaul issued a decision last year in the case of the Shaheen Bagh protests, ruling that public roads cannot be obstructed in the name of protests and that protests should take place only in designated areas.

Tushar Mehta, the Solicitor General of India, informed the bench that a High-Level Committee had been formed to hold talks, but the protesting organizations refused to participate. He asked the court to include the protesting organizations as respondents in the case. The bench ordered the Solicitor General to file an application in this regard. The case has been rescheduled for next Monday's hearing.

Previously, the bench stated that the Union and the governments of Haryana, Delhi, and Uttar Pradesh must find a solution to the road blockade.

To this, Haryana has filed an affidavit stating that it is making "sincere efforts" to persuade protesters to end the blockades.

Monicca Agarwaal, a resident of Noida, filed the PIL, alleging that travelling to Delhi from Noida for her marketing job had become a nightmare, taking 2 hours instead of 20 minutes for two weeks.