Hindu buried as Muslim in the Saudi Arabia: Delhi HC intervenes for return of mortal remains of the deceased to India 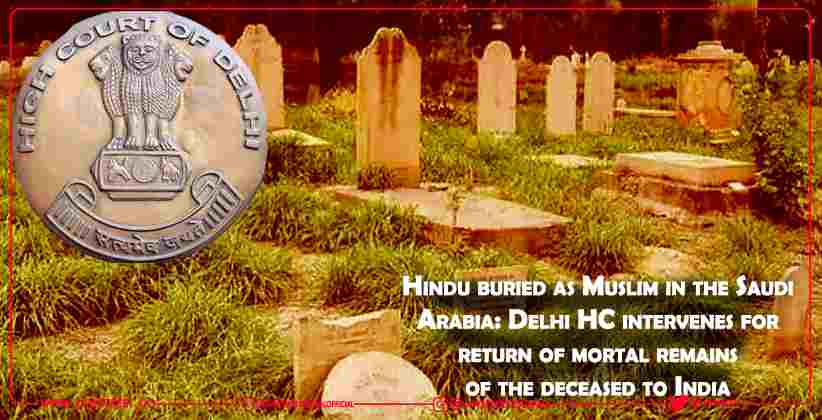 Judiciary Apr 06, 2021 Nargis ( Editor: Ekta Joshi ) 24 Shares
24 Shares
In ANJU SHARMA V. UNION OF INDIA, the Delhi High Court through its secretary and ANR, has contacted the Embassy of Saudi Arabia and has requested for enhanced cooperation to return the body of a man who died in Saudi Arabia and was buried according to theMuslim rituals.

Facts of the case: The wife of the deceased husband has filed the petition before the Court and has requested the Court that the body of her husband be returned immediately from the Saudi Arabia. The complainant had claimed that the " deceased husband" was buried as per the Muslim rituals in Saudi Arabia, due to the wrong translation of the deceased's Death Certificate as "Muslim". The petitioner has made several statements to respondent to enable the transporting of the mortals of her husband back to India in a timely manner.

Submission of Ministry of External Affairs:

According to the information of the Ministry of the Foreign Affairs, the death certificate was obtained from the deceased’s employer. The fault in the death certificate was also addressed by the MEA. Before burying the body, the Saudi Arabia has notified the Indian Consulate. However, in this case due to the adoption of the Covid-19 protocol, the burial was carried out before notifying the consulate. The deceased was buried in a non-Muslim cemetery. After the funeral was announced, the Indian Consulate immediately took the action by writing a letter.

The representatives have assured that the mortal will be returned back to India. Since the issue involves a Foreign Country, the exact time can't be determined. In addition to this,it was reported that the employer transferred the cash payment to the family of the deceased in the Bank account of the Indian Consulate in Jeddah.  Court's Observation: By terming the issue as an "Unfortunate", the Delhi Hugh Court has said,

“In order to emphasize the sensitivity of this issue, the Multilateral Environment Agreement Officials should also update the case and seek the assistance of the Deputy Head of the Mission of the Royal Embassy of Saudi Arabia, based in New Delhi.”

The court also urged the Deputy Head of the Royal Embassy of the Saudi Arabia to provide valuable assistance to the Embassy in providing a timetable.