"Lockdown was imposed unexpectedly; immigrant workers had no money and food yet thrown in prison": Gujarat High Court 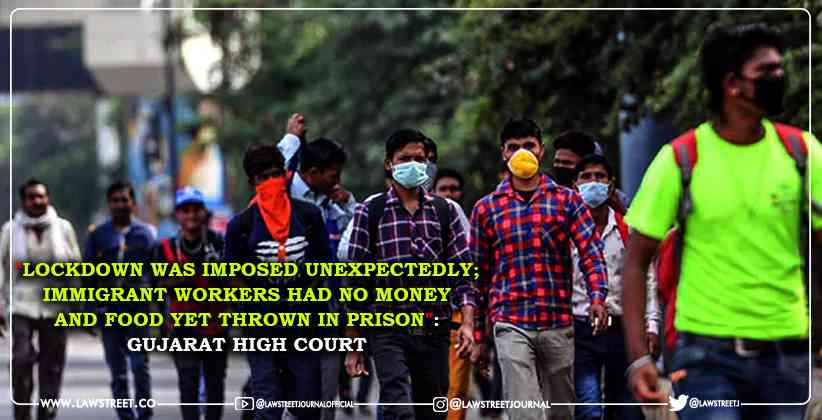 The Gujarat High Court has stated that during the initial phase of COVID, just after abrupt installation of Lockdown, a lot of migrant labourers struggled since they were imprisoned for rioting/lockdown breaches simply because they attempted to return home, even though they had no bread or income.

The Bench of Justice Paresh Upadhyay indicated: "There was a spontaneous enforcement of Lockdown, due to the emerging scenario at that particular moment in time, and we are nowhere to remark on it.  Migrant labourers had no rations, no food, and stores were open, and they intended to return home, but almost all of them were arrested, and I had dealt with a number of such bail petitions... Would they be the perpetrators or the victims?"

Conversely, even during second phase of COVID (in April 2021), individuals had difficulty obtaining Remdesivir injections, and they were abandoned in that condition to cope with on their own, according to the Court, and there were initiatives to distract audience attention.

"The market for Remdesivir was at an all-time high during the Second Phase, yet you constructed a decoy (to apprehend those selling Remdesivir), but did you manage to make plans for it?" the court asked the Government's attorney.

During the second phase of Covid-19, the Gujarat High Court confronted the State Government about using the Prevention of Anti-Social Activities Act, 1985 (PASA) in situations of unlawful acquisition and distribution of Remdesivir injections.

The Panel also questioned the use of FIRs and the application of PASA in the procurement of Remdesivir, calling it a ploy to deflect people's attention away from the fact that they couldn't acquire the drug.

This could also pose the possibility as to whether the State Government is willing to accept such harsh measures uniformly against all accused/citizens in all cases, without it being swayed by the role of the relevant authorities, where objections have been filed alleging unauthorised procurement and distribution of Ramdesivir injunctions.

Significantly, the Court expressed its displeasure with the police commissioners of Ahmedabad and Vadodara for implementing PASA on persons suspected of peddling counterfeit Remdesivir. The Court also continued implying that a political party had distributed 5,000 Remdesivir shots in Surat.

The Gujarat State Government was thoroughly investigated by the Gujarat High Court for imprisoning people under the Prevention of Anti-Social Activities Act, 1985 (PASA) for acquiring a few Remdesivir injections, despite the fact that the act of political party distribution of 5K injections was found to be in conformity with the act.