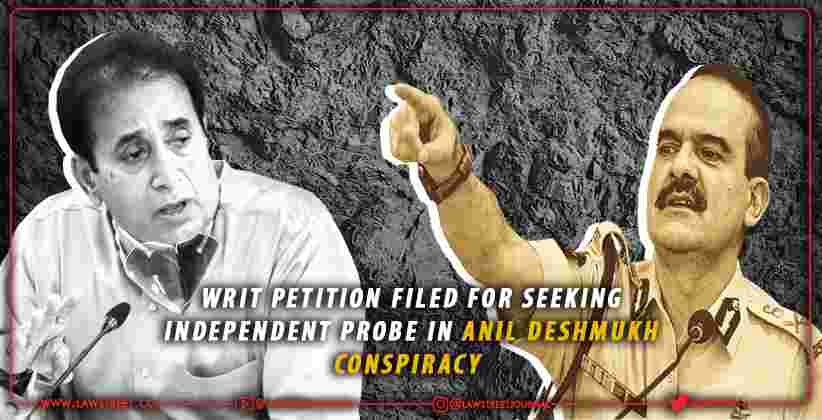 Judiciary Mar 24, 2021 ABHISHEK GAIND ( Editor: Ekta Joshi ) 5 Shares
5 Shares
A criminal writ petition has been filed before the Bombay High Court on Tuesday,24th March  2021 by Jaishri Laxman rao Patil – a Mumbai-based lawyer seeing an investigation into the matter concerning the Anil Deshmukh conspiracy by CBI, ED or any other independent agency.

The plea also seeks investigation to examine the role that Param Bir Singh (Ex Commissioner of Thane) had to play in this conspiracy. BACKGROUND

Param Bir Singh was previously posted as the Director General (DG) of the Anti-Corruption Bureau (ACB). He is a former Police Commissioner of Thane. The Maharashtra government removed Singh as commissioner on 18 March 2021 in the aftermath of a security incident in which sticks of gelignite were discovered outside of Mukesh Ambani’s residence. Presently he is posted as the Commandant General of Home Guard and Civil Defence   After being removed from the post of Commissioner of Thane, Param Bir Singh made several allegations on Home Minister of Maharashtra in a letter to the Chief Minister Uddhav Thackeray. Anil Deshmukh allegedly asked suspended police officer-Sachin Vaze to collect 100 crore for him every month. In this letter to the CM, Param Bir alleged that Anil Deshmukh called Sachin Vaze to his official residence several times over the past few months and repeatedly instructed him to assist in collection of funds for him. Param Bir Singh further added that Anil Deshmukh told Sachin Vaze that “there are 1750 bars and restaurants in Mumbai and if a sum of 2-3 lakhs is collected from each of them ,a monthly collection of 40-50 crores was achievable. The rest of the collection can be made from other sources.”  The Home Minister on the other hand seems to deny all the allegations against him on his twitter handle and claims that “The Former Commissioner is trying to save himself as the involvement of Sachin Vaze in Mukesh Ambani and Mansuh Hiren’s case becoming clearer from the investigation carried out so far and the threads are leading to Mr Singh as well.” An explosives carrying SUV was found parked near Mukesh Ambani’s residence on 25th February. The SUV even had a threat letter addressed towards Mukesh Ambani. The SUV belonged to businessman Mansukh Hiren who claimed that the SUV had been stolen a week ago. On 5th March, his body was found at Mumbra Creek, Thane. After Mansukh Hiren’s death, National Investigation Agency (NIA) took over investigation into this matter.Sachin Vaze was arrested on 13th March by the National Investigation Agency in the course of their investigation.   CURRENT SCENARIO The petitioner alleges that Param Bir Singh was sitting on this information for over a year without bringing it in the eyes of law and the concerned authorities.  "It shows his role as well, he was the superior police officer and was having powers to take steps in accordance with law under section 154 of CrPC but he failed to do so for what reasons is the matter of investigation, after registration of FIR."

In the plea, it was also stated that the investigation needs to be carried out at the earliest or the investigation might be destroyed by the officials. Anil Deshmukh, Home Minister of Maharashtra announced that he will file a defamation case against the Ex-Commissioner Param Bir Singh for making false allegations and defamatory statements against him in his letter to the CM which were made public later.