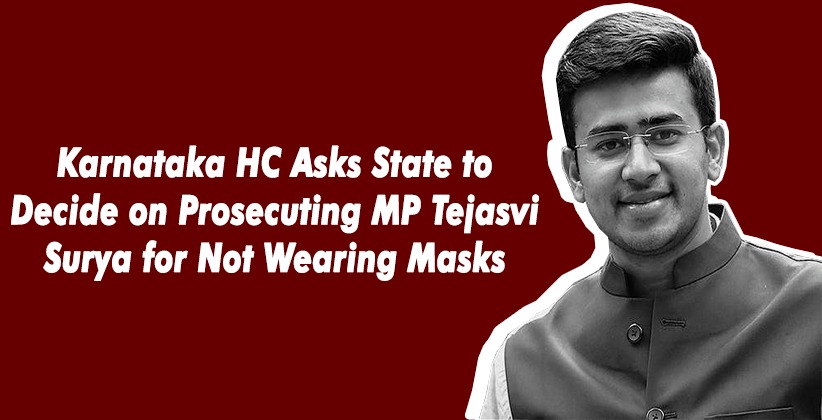 Karnataka High Court has called on the state government for not penalizing BJP Lok Sabha member Tejasvi Surya and others for not wearing masks and flouting norms by attending political events.

The petition was filed when daily cases had touched a peak of over 10,000 in Karnataka, with the majority being reported in Bangalore. Although the number of cases has been steadily decreasing, Bangalore remains a concern.

Senior lawyer G.R. Mohan, who appeared for advocate Geeta Mishra who impleaded in the case, said that the bench asked the BJP government lawyer whether the state had fined Surya and the others.

Karnataka is the second worst-affected state in India with over 8.38 lakh Covid cases and more than 11,000 deaths.

In a memo filed to implead in the original petition, Mohan had submitted news clippings showing Surya riding an open vehicle, which was part of a convoy, from Bangalore airport to the BJP party office after he arrived in the city on September 30 following his appointment as BJP YuvaMorcha national president.

The visuals showed how Surya and others had neither maintained physical distancing nor worn masks.

The petitioner had cited violation of the Disaster Management Act and the Karnataka Epidemic Diseases Ordinance, 2000, that call for stringent punishment of up to five years in jail for such violations.

“The court questioned the government about the rationale behind penalizing common citizens with fines while not acting against politicians,” Mohan said.

“Police were also taken to task for not filing FIRs against politicians who have violated the norms during public meetings and processions, especially when these are cognizable offenses,” he further added.

The court also came down heavily on a compliance report filed by the city police that claimed that Surya had followed physical distancing protocol and worn a mask during the rally to the party office.

“The court asked how the police report could say he (Surya) had complied with the norms when pictures carried by the media showed otherwise,” Mohan said, adding the procession was held without police permission.

According to the police report, the force had refused permission to the BJP event to receive Surya in light of the pandemic. It further stated that party supporters had gathered at a highway tollgate on the way back from the airport and accompanied Surya in a convoy.

The police informed the court that it had booked 25 BJP activists for not wearing masks at the Surya event.

Surya could not be reached for comment as his secretary who handles his calls did not respond.

The court sought details from the government about the number of such political rallies allowed during the recent months when safety guidelines related to the epidemic were in force.

The hearing for the case will be held on November 9.