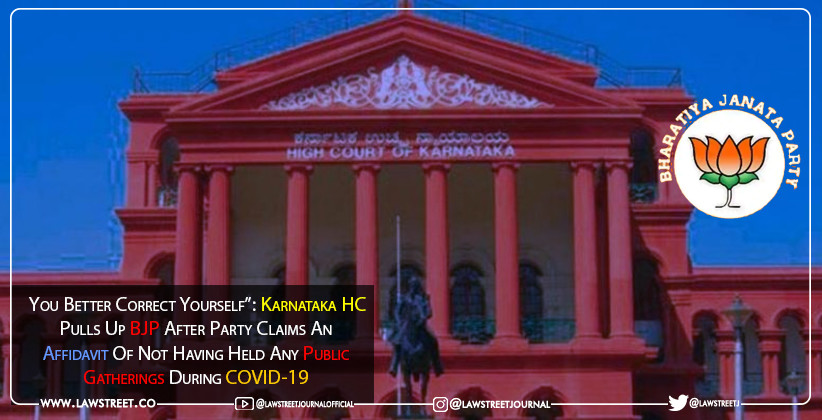 Judiciary Mar 05, 2021 Aditi Aggarwal ( Editor: Ekta Joshi ) 13 Shares
13 Shares
The Bharatiya Janata Party(BJP) filed an affidavit filed in which it stated that no public rally or gathering was held by the party during the COVID-19 pandemic times.

The counsel BJP withdrew the affidavit on Wednesday before the Karnataka High Court and and expressed that he would like to file a fresh one. This happened after the Court warned that there will be action for perjury for making a false statement on affidavit. The HC said that the Bench had photographs which contradicted the ruling party's version.

“A very bold statement to make that this party has not conducted any road shows or gatherings. This is false. You better correct yourself. There are photographs of the events,” a bench headed by Chief Justice Abhay S Oka told the counsel representing the BJP.

“You (Counsel for BJP) better take instruction or else this will be a false statement on oath. Not a single road show or gathering or public rally was held by you?Are you very serious about this statement?,” a bewildered CJ Oka asked.

"We expected you to take the lead and whenever you hold some function or rallies you lay down some norms for your party workers. That is not done by you", the CJ added.

Following this, the bench ordered :

The bench was hearing a petition filed by an NGO ‘LetzKits Foundation,’ seeking the proper enforcement of COVID-19 protocol guidelines in the State.
The state government has filed an affidavit saying that it was never its intention to prosecute or imprison persons who were found not wearing masks in public places or not maintaining social distance under the stringent provisions of section 5 of the Karnataka Epidemic Diseases Act, further submitting a copy of the Karnataka Epidemic Diseases (Amendment) Act, 2020, which provides for punishment of fine instead of imprisonment for violation of COVID-19 norms. Before the amendment, as per Section 5 of the Act, anyone who contravenes the regulations/orders and directions issued could be imprisoned for a minimum of three months which can be extended up to five years. A fine of not less than Rs 50,000 and up to Rs 2 lakh could also be levied. By way of amendment to Section 5, after sub-section (3), the following was inserted:

"(3A) whoever contravenes the provisions of sub-section (1) shall be punished with such fine as may be prescribed in rules or in regulations, which may extend to fifty thousand rupees or with imprisonment for a term which may extend up to three months or with both."

Secondly, it has brought in substitution to section 10 of the Principal Act. The amended section shall now read as "10. Composition of certain offences.- (1) Any offence punishable under the provisions of sub-section (3A) of section 5 committed before or after commencement of the Karnataka Epidemic Diseases (Amendment) Act, 2020 may either before or after institution of prosecution be compounded by such officer authorised by the Government, on payment of such amount as may be notified by the Government. On such compounding, an offender, if in custody, shall be discharged and no further proceedings shall be taken against him in respect of such offence.

(2) Any offence punishable under sub-section (4) of section 5, committed before or after the commencement of the Karnataka Epidemic Diseases (Amendment) Act, 2020 may be compounded with permission of the court, by a person against whom such act of violence is committed." The Court, therefore, directed the State government to respond on whether it has framed any Rules or Regulations prescribing fine as provided under sub-section (3A) added to Section 5 of the Karnataka Epidemic Diseases (Amendment) Act, 2020. The High Court directed the State government and the city police to submit a report on the action taken over the violation of COVID-19 norms during a rally organised on February 21 seeking greater reservation for the Panchamasali Lingayat community under the Other Backward Classes category. The court also directed the petitioner to place on record the names and addresses of the office bearers of the ninth respondent (Janata Dal (S)) so that appropriate action can be initiated against them on their failure to respond to the notice of the court.

The Additional Government Advocate will also take instructions whether a notification has been issued by the State Government in terms of substituted Section 10 notifying the amounts which are required to be paid for compounding of the offences punishable under sub- section (3A) of Section 5 of the Principal Act, the Court added.  The matter will be heard next on March 12, 2021.    [READ ORDER]