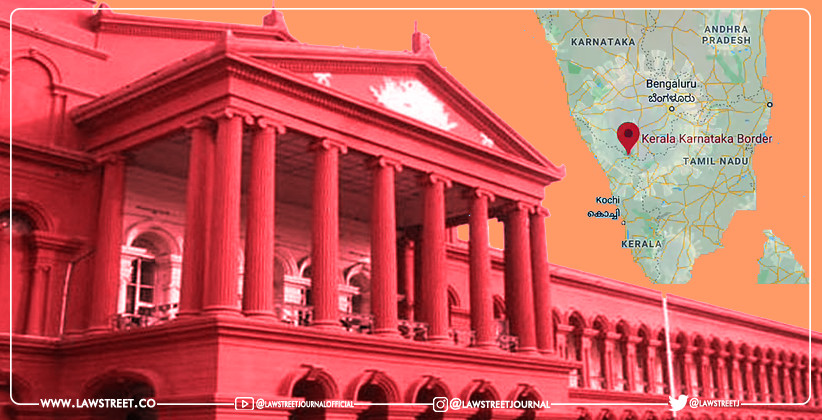 Judiciary Apr 01, 2021 Tanya Sehrawat ( Editor: Ekta Joshi ) 4 Shares
4 Shares
On Tuesday (March 30, 2021), Karnataka High Court went on to observe how the State Government cannot close its borders for people from other states in absence of adequate rules that empower the authorities.

Karnataka Government has been directed by the court to issue statement saying that all the check posts across the Kerala-Karnataka border are open. Along with this, it must be stated that negative RT-PCR reports are mandated for persons who enter the state from Kerala.

The said observations were made by a Bench comprising Chief Justice Abhay Shreeniwas Oka along with Justice Suraj Govindaraj. They stated that the guidelines issued by the Central Government, which are currently in force, do not allow the closures of borders.

The court said, “There is a concept of Federalism, you cannot simply close borders." These observations were made in a PIL that challenged the restrictions imposed by the Karnataka Government as to the movement of the people along the Kerala-Karnataka border as the COVID-19 infection rate is on a high again.  The Karnataka HC was informed by the Kerala Government that the directive pertaining to closing of rarely used check-posts at the Kerala border issued by the Deputy Commissioner of Dakshina Kannada district will not be acted upon.  The Division Bench was also informed by the Additional Government Advocate the reconsideration of Clause 3 of the directives issued on March 15.  Clause 3 of the said directive states the following:

"In consideration of the situation, every gram panchayat,/urban local bodies/municipality/town municipality, shall identify the points of the arrival in their respective jurisdiction to facilitate the public/student opening of the checkpost which are more likely to be used and closing of check post which are rarely used such decision must be taken and directions issued for arrivals from Kerala/Maharashtra state by Panchayat Task force committee which is already in existence."

The order stated, "AGA on instructions states that clause 3 of the proceedings will not be acted upon." The Petitioner, B Subbaya Rai was represented by Advocate K Ravishankar who claimed that the recent guidelines that have been issued by Union Government dated March 23 give no space to impose restrictions on the inter and intra-state level.

This was affirmed by the Counsel representing the Central Government by saying, "no border restrictions has been imposed in the latest guidelines."

The matter is scheduled for hearing on April 1, 2021. Recently, the Court had also expressed its resentment on a modified order that was passed by the Karnataka Government pertaining to restrictions on on-road travel from Kerala owing to a rise in the COVID-19 cases in the state.  The same was also supposed to be withdrawn by the State Government after the Court directed it to do the same. It also said how the modified order passed by the Deputy Commissioner of Dakshina Kannada on March 15 has been misconceived and issued without any application of mind.