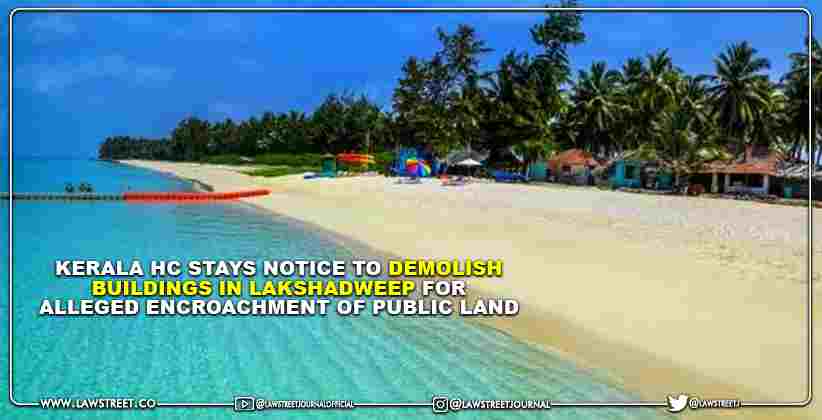 On Saturday ( July 10, 2021) the Kerala High Court  stayed the show-cause notices issued to Lakshadweep residents ordering them to demolish their buildings within two days because they were built on government land.

During the special sitting, Justice Sunil Thomas issued an interim order suspending the operation of the aforementioned notices pending the outcome of the writ petition.

The notices claimed that the petitioners had built "sheds/buildings on government land," and they were ordered to show cause "within two days of receipt of the notice why they should not be evicted from the said land.

On behalf of the petitioners, Advocate P. Deepak appeared. He argued that, while the notices were served on the July 6, 2021 the deadline for filing a reply/objection was 5 PM on the July 7, 2021, giving them less than 24 hours from the time they received the notices.

The notices also allegedly required them to appear in person or through a duly authorised representative for a personal hearing on July 8, 2021. This was an attempt, according to the petitioners, to complete the entire exercise within 72 hours of issuing notices.

These notices were claimed to be tainted by errors visible on the face of the record and thus liable to be quashed. It was also established that the respondents did not have the authority to issue the notice.

Despite filing applications for additional time to submit a reply/objection, the respondents did not respond. Furthermore, on July 9, 2021 certain officials and police officers were found marking the sheds/buildings specified in the notices.

The petitioners anticipated that the sheds/buildings in question would be demolished on July 10, 2021 and July 11, 2021 due to their failure to file a reply/objection to the notices. Such a move by the respondents was alleged to be illegal in and of itself, as well as a grave miscarriage of justice.

The petitioners also cited several Rules provisions to demonstrate that the respondents' method of eviction was improper and an abuse of statutory power.