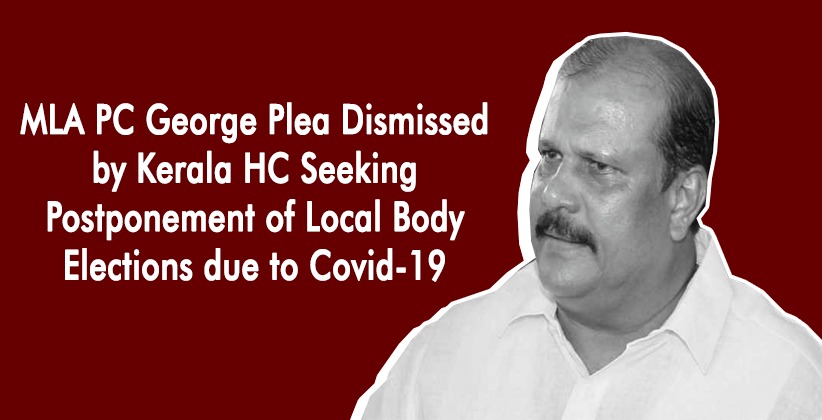 MLA PC George had approached the High Court challenging the decision of Election Commission contending that the conduct of local body elections in the State of Kerala by seeing the present heath scenario is violative of Article 21 of the Constitution of India. George has sought a direction from the court to defer elections to the local bodies, in the light of COVID situation.

The Kerala High Court has dismissed pleas challenging the conduct of elections to Local Bodies in Kerala for the year 2020 amidst of COVID-19 pandemic.

The Commission which is from Respondent's side submitted that the proceedings were issued only after considering the views and suggestions received from the deliberations, inputs, the advisory issued for control of COVID-19 by Director of Health Services.

A bench of justices Chief Jusrice S. Manikumar and Justice Shaji P. Chaly noted that it has taken note of COVID-19 situation and as the views expressed by Health Services and Kerala Government has taken mandate of the Constitution of India contained in Article 243-U.

The Court by referring to the recent judgment of Patna High Court, which had also dismissed pleas seeking for a direction to the Election Commission for the postponement of the impending Bihar Assembly Elections 2020. It was held therein that the ultimate decision on when to hold elections lies with the Commission and it is unfathomable to assume that the Commission has taken its decision without considering the prevailing situation.

The Court observed that, “we are of the view that the constitution of India is supreme, and every decision of an authority under any Act, the State Election commission should be in accordance with the constitutional mandate”. “Merely because there is a rise in the number of cases reported for COVID-19 cannot be contended that the State Commission has not considered the gravity and impact of COVID-19.

The Court further observed that COVID-19 situation along cannot be a ground to declare that the decision of the Commission to hold elections mandated as per constitutional provisions is invalid.

Judiciary Jul 21, 2021 Celin Sunil ( Editor: Ekta Joshi ) Shares
0 Shares
Many housing societies and apartment associations have passed a decision to bar residents from keeping pets in their homes, which has been challenged in the Kerala High Court by an animal welfare organisation, which contended that banning pets was “illegal, arbitrary and unfair”.A Public Interest Litigation (PIL) has been moved by People for Animals (PFA), contending that ‘associations cannot frame bye-laws or amend them in a manner at variance with the law of the country even by...
Read full post

Legal Insiders Jul 14, 2021 Saakshi S. Rawat ( Editor: Ekta Joshi ) Shares
0 Shares
On 9th July 2021 (Friday), the Kerala High Court Advocate's Association issued a notice warning its members that if they continue to utilise the e-filing technique in contravention of its ruling, they will face disciplinary actions.The KHCAA determined in its General Body Conferences on the 16th and 17th of May 2021 that it will not use the e-filing method to file cases and that all of its members will file cases physically.The Association expressed gratitude to the majority of its members for...
Read full post