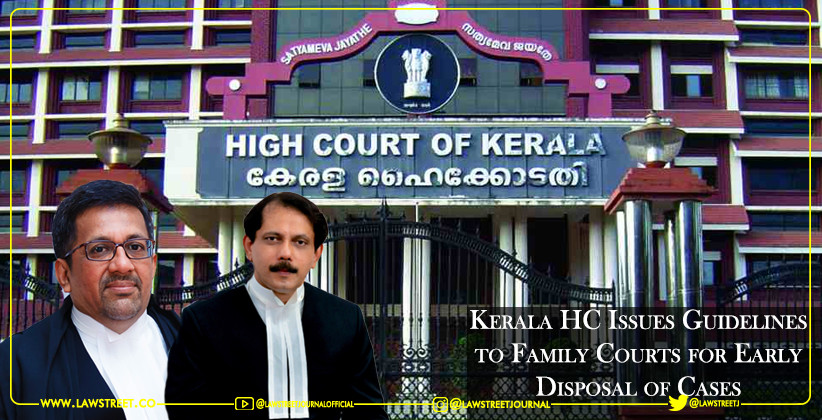 The Kerala High Court in a significant judgment on Tuesday ( March 22, 2021) issued guidelines to streamline and prescribe a uniform procedure for disposal of cases before Family Courts in the State.

The order has been passed by a Division Bench comprising of Justices A Muhamed Mustaque and CS Dias, who noted:

We  are,  inthis  batch  oforiginal  petitions, asked   to  resolve   the   difficulties   caused  to   the litigants  dueto  the  inordinatedelay  in  disposalof cases  by  theFamily  Courts  inthe  State.

The Bench further observed that:


“The supervisory jurisdiction of this Court impels us to issue directions to streamline the procedure as conceived under law to avoid failure of justice. Failure of justice in this context is to be understood to the non-adherence of rules which ensures the right of the disputants to get timely justice.These normative and procedural outlines, which are illustrative in nature, shall be scrupulously followed by the Family Courts.”

Causes for the delay:

The Court attempted to examine why proceedings before family courts were obstructed by delays.

The court observed that it was  a  routine practice  inthis  Court  tocall  for  reportsfrom  the Family   Courts  and   issue  directions  to  dispose of proceedingsin  a  timebound  manner.  Thishas  caused perceived  injusticeto  many,  asthose  who  approachthis Court  stand  inadvantageous  position  ingetting  their cases   disposedof  on  apriority  basis.

Therefore, the Bench in its directions has expressly provided that parties who move applications for expeditious disposal of cases do so before the concerned Family Court prior to moving the High Court.

Additional reasons for delay were that lawyers and judges often carried their experience with adversarial litigation into family disputes, transforming proceedings from the envisaged harmony to an adversarial set up.

Pointing to the Objects of the Family Courts Act, which was enacted to help the parties to resolve their disputes in a harmonious way in preference to adversarial litigation, the Court prescribed a list of detailed requirements for family court proceedings.


The Bench on reasons for the rise of family disputes:

“The state of Kerala, which accounts for 3% of Country's population, has one of the highest numbers of matrimonial cases in the Nation. The statistics available with the NJDG gives a clear picture of the story. At present, there is a staggering 104015 cases pending in the 28 Family Courts in the State. This data is alarming and if at all not shocking; it speaks about the disintegration of the family culture and the anomie our society is facing. We had a structured society in the past where everyone held hands to resolve such conflicts. Today, we witness alienation or aloofness of individuals from the larger family, society and the community as a whole. Disputes soar to fierce battles combated through the adversarial litigation. Causes are projected to establish one's rights sans their obligations, forcing the Family Courts to drift its role as conceived under law and to embark the lines of a normal court"

The Bench reminisces its experiences during consultations with Presiding Officers of Family Courts:


“We could feel the stress and pressure of the Presiding Officers of the Family Courts who are burdened with a huge backlog. Some of the Family Courts are compelled to board more than 200 cases a day in an attempt to clear the arrears. The delay in disposal of the cases has resulted in large number of interlocutory applications being filed on day-to-day basis. We apprehend that the backlog is leading to a collapse of justice delivery system, which stands portrayed in the large number of original petitions being filed before this Court seeking for the speedy disposal of the proceedings"

The court at the end disposed the original petitions by directing the family courts to comply strictly with some directions, which shall be implemented with effect from 1st June 2021.

Judiciary Jul 21, 2021 Celin Sunil ( Editor: Ekta Joshi ) Shares
0 Shares
Many housing societies and apartment associations have passed a decision to bar residents from keeping pets in their homes, which has been challenged in the Kerala High Court by an animal welfare organisation, which contended that banning pets was “illegal, arbitrary and unfair”.A Public Interest Litigation (PIL) has been moved by People for Animals (PFA), contending that ‘associations cannot frame bye-laws or amend them in a manner at variance with the law of the country even by...
Read full post

Legal Insiders Jul 14, 2021 Saakshi S. Rawat ( Editor: Ekta Joshi ) Shares
0 Shares
On 9th July 2021 (Friday), the Kerala High Court Advocate's Association issued a notice warning its members that if they continue to utilise the e-filing technique in contravention of its ruling, they will face disciplinary actions.The KHCAA determined in its General Body Conferences on the 16th and 17th of May 2021 that it will not use the e-filing method to file cases and that all of its members will file cases physically.The Association expressed gratitude to the majority of its members for...
Read full post