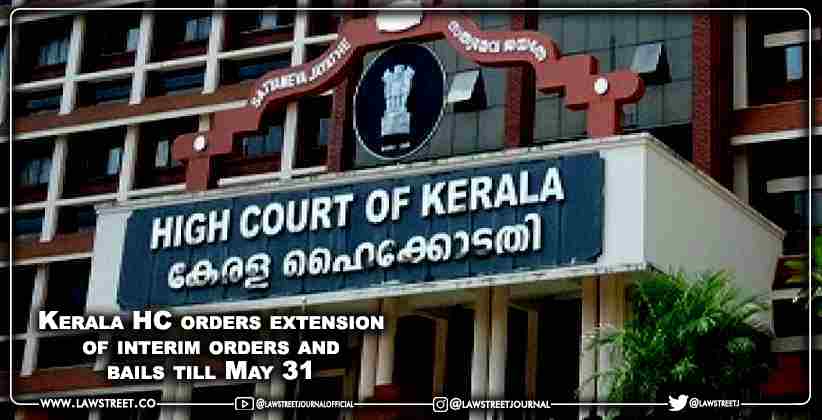 The Kerala High Court on Wednesday (May 19, 2021) has ordered that all interim orders and interim bails which are due to expire during the lockdown period shall be extended till May 31, 2021.

In light of the surge in the Covid-19 pandemic, the Kerala State Government had declared a lockdown from May 8, 2021, to May 23, 2021, to control the spread and for alleviating the grievances of the public. Normal proceedings before the courts and tribunals were suspended given the ongoing lockdown.

A bench of Chief Justice S. Manikumar, Justice C.T Ravikumar and Justice Shaji P. Chaly directed that “All interim orders passed by the Courts/Tribunals upon which High Court exercises jurisdiction under Article 227 of the Constitution of India, which are due to expire during the lockdown period, are to be extended by this Court and accordingly, they are extended upto 31.05.2021.”

The litigants and their counsel will be denied the opportunity to approach Courts and Tribunals, during the lockdown period, for applying for an extension. The Court in order to free the litigant from this impediment sought to extend the interim orders till May 31, 2021.

The Kerala High Court further directed the revival of its directions which were passed last year during the first lockdown period. The Court emphasized that its directions were made pursuant to the Supreme Court’s order dated May 7, 2021, in respect of extension of limitation, releasing prisoners or parole, etc.

Orders of bail or anticipatory bails, restricted for a limited period, which may expire during the lockdown period, were also directed to be extended. Interim bail granted to prisoners who were released would be limited up to May 31 or till the end of the lockdown period whichever is earlier.

In respect of interim orders issued under Section 138 of Negotiable Instruments Act the Court observed as thus “ We are also of the view that with respect to the matters under Sec.138 of the Negotiable Instruments Act, 1881, Courts would have issued directions, for appearance or payment of certain amounts, due under cheques issued and dishonoured, and in such matters also, there will be a difficulty for the litigant to adhere to the directions/orders issued, as regards appearance or payment, within such time as ordered, as the case may be, and considering the lockdown and the restriction in movement of the above, to seek for modification of any such orders, the same have to be regulated as well. In the above circumstances, we direct that with respect to the matters arising out of the proceedings under Sec.138 of the Negotiable Instruments Act, interim orders, if any, issued already need not be enforced until 31.05.2021. “

The Court made it clear that aggrieved parties will be at liberty to move before the appropriate court to vacate such interim orders which have been granted an extension.