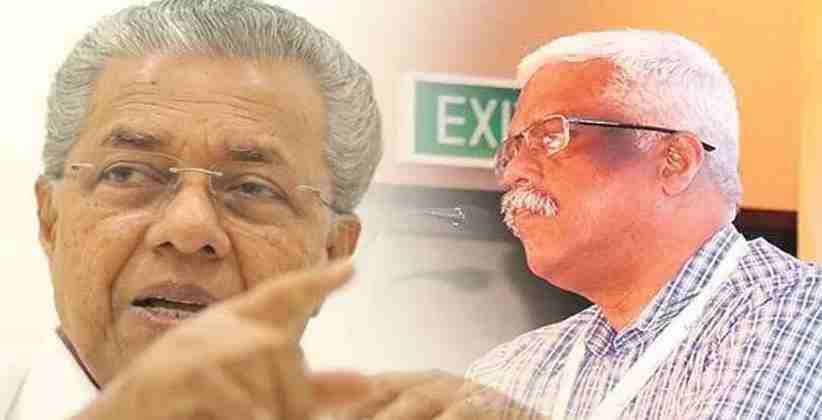 The division bench comprising Chief Justice S. Manikumar and Justice Shaji P. Chaly held, noting that the Petitioner had failed to produce an iota of proof to support the charges that;

"The petitioner has solely relied on the statement of the Leader of the Opposition and contended that if it is true, the matter requires investigation. As such, he has no evidence or material, and that is why he has prayed for an interim direction, as stated above. The investigation is the function of the police and the writ court cannot be converted as an investigation agency."

The Petitioner, a resident of Cherthala City in Kerala, had moved the High Court on the grounds that Shivashankaran was indeed a kingpin behind all the above-mentioned scams and that Chief Minister Vijayan was definitely fully aware of the incidents, although he may not be directly involved in the nitty-gritties of transactions, and he further promoted the same by breaching his official duty and position as CM.

He had, therefore, sought the registration of FIR against both of them, allegedly for the smuggling of gold to India using the diplomatic channel and the scams Sprinkler, BevQ App and eMobility Consultancy, which constitute offenses under the Conservation of Foreign Exchange and Prevention of Smuggling Activities Act, 1974, the Indian Penal Code, 1860, the Prevention of Corruption Act, 1988 and the Customs Act.

It was argued that these charges were first posed in the State Assembly by the Leader of the Opposition and, if the same is true, constitute corruption and crime of an unheard-of scale in Kerala 's history by any political leader/bureaucrats.

In opposition to the appeal, the Advocate General submitted that the documents made available and the pleadings made would instill confidence in the Court in order to grant the reliefs sought by the Petitioner.

Alternatively, he pointed out, the Petitioner had relied solely on the Opposition Leader 's declaration and had failed to provide any supporting materials.

"As rightly pointed out by the learned Advocate General, no document has been produced by the petitioner along with the writ petition to substantiate the same.

…the petitioner has only mentioned the names of the alleged scams, viz., Sprinklr, BevQ App. and e-Mobility Consultancy. There are no details in the Statement of facts as to what they are. Except stating that the Hon'ble Chief Minister is involved, abused his position, and his office is alleged to be nerve center, there is nothing in the Statement of facts indicating, which action or inaction of the Hon'ble Chief Minister or the others, against whom allegations have been leveled, have indulged in corruption," the bench concurred.

The petitioner argued that it was not possible for him to produce evidence, and that is why he sought orders from the Inspector General of Police and/or the Director, Vigilance and Anti-Corruption Cell, to take custody and/or produce all documents, proceedings, correspondence, and communications, all electronic data, including records of video and telephonic calls concerning the aforesaid scams, and in particular, the gold smuggling scam, involving the Respondents before the Court as and when necessary.

Rejecting this contention, the court explained that there was mention in the CrPC of the correct procedure for the complainant if the police refused to lodge an FIR.

"If an inquiry has to be conducted for satisfaction regarding the commission of the offense, then it is not proper on the part of the High Court to invoke the power under Article 226 of the Constitution of India and parties must be relegated to resort to their statutory remedy available under the Code in such cases," the Court held.

In view of a plethora of precedents, setting out the procedure that has to be adopted by a complainant if the Police refuse to register an FIR, the bench reiterated,

"After lodging the complaint before the concerned police and if the police are not registering the case, the aggrieved person/complainant can approach the Superintendent of Police with a written application under Section 154(3) of the Code of Criminal Procedure, and even in a case the Superintendent of Police also does not register an FIR or no proper investigation is done, the aggrieved person can approach the Magistrate concern under Section 156 (3) of Cr.P.C."

In the present case, the Court noted,

"Without resorting to the procedure as contemplated in the Cr.P.C, the petitioner has approached this Court under Article 226 of the Constitution of India.

…since the petitioner has got an efficacious and alternate remedy available under the Code, if there is inaction on the part of the Station House Officer in not registering a case on the basis of the complaint given by him, the petitioner cannot take recourse to this Court for issuance of the writ of mandamus or other writs…"

Reliance has been put on UP & Ors, the Treasurer, Minor Irrigation and Rural Engineering Services. V. Ram Arya & Anr Sahngoo (2002) 5 SCC 521, where, after considering the issue as to whether the High Court could order an investigation by CBI pursuant to Article 226 of the Constitution, the Supreme Court held that the Court had to draw a decision on the basis of the pleadings and Evidence showing a prima facie case against an individual and simply because a party has made allegations against an individual, the High Court can not order CBI to investigate whether or not the person has committed the alleged offense.

"Remedy under Article 226 of the Constitution of India is extraordinary. Exercise of power to entertain a writ petition arises if only the person, who alleges inaction on the part of the statutory authorities, has no other alternative and efficacious remedy under the Statute.

…Merely because allegations are leveled against the Hon'ble Chief Minister and others and in as much as the allegations relate to abuse of power, it cannot be contended that nature and magnitude require the issuance of a writ as the only remedy available to the petitioner. However, to intricate the magnitude and the nature of the offenses alleged, the Code of Criminal Procedure has envisaged a procedure to be followed and, therefore, the same cannot be given a go-by, and a writ petition is not the proper remedy," the bench concluded.