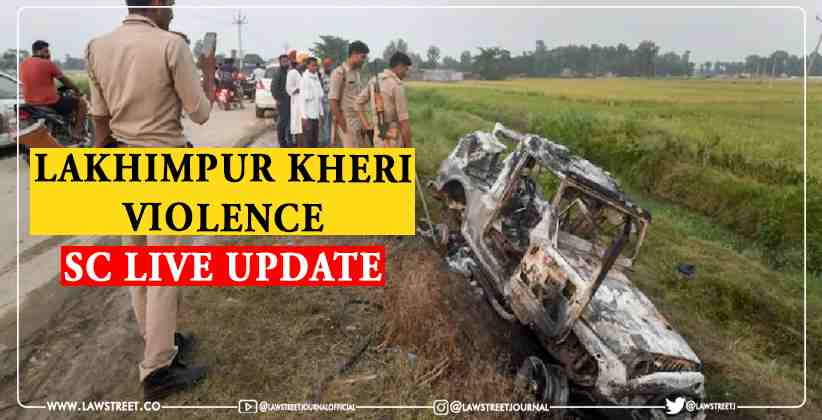 CJI: this is part and parcel of public life.. let it be.

CJI ORDERS: Ld Counsel explains various steps taken by state govts. status report was filed and we are not satisfied by steps taken.

CJI: Counsel assures he will satisfy the court and also apprise court of an alternative agency which can conduct the probe. List this matter immediately on reopening. cousnel has assured highest police officer in the state will be informed to preserve the evidence in the case.

CJI: this is part and parcel of public life.. let it be.

CJI ORDERS: Ld Counsel explains various steps taken by state govts. status report was filed and we are not satisfied by steps taken.

CJI: Counsel assures he will satisfy the court and also apprise court of an alternative agency which can conduct the probe. List this matter immediately on reopening. cousnel has assured highest police officer in the state will be informed to preserve the evidence in the case.

CJI: We can keep this after vacations and let us see how it progresses

Justice Kant: State government has to take steps in this regard

Salve: we have to make a pudding which is palatable.

CJI: we dont know if the good probe is conducted in this case because of the officers involved. Please ask the DGP to ensure that the evidence is protected and not destroy all in interim by the time another agency takes it over

CJI: this is all tv things

Justice Kant: we are sorry to see how media is exceeding freedom of speech and expression. CJI is gracious enough to let this go else proceedings could take place

Salve: we all have been victim of such tweets. so absurd
.. this deserves to be treated with contempt

CJI: so absurd that i am in court, how can i go to lucknow

Justice Kohli: we respect freedom of media, but this is not the way to cross the limit

CJI: Mr Salve, we have respect for you. we hope the state will  take necessary steps due to the sensitivity of the issue. we are not making comments. CBI is not a solution for reasons known to you.. because of the persons.... better some other person look into

Salve: they should have done the needful

CJI: What is the message we are sending?

Salve: UP govt says if nothing happens warrant will be issued

CJI: if 302 case is registered the accused will be apprehended immediately

Justice Kant: Its a brutal murder of 8 person. law must take its course against all accused.

Salve: between today and tomorrow all shortfalls will be used

CJI: We have seen details of the SIT, you have DIG, Supdt of police, circle officers..all these are local people

UP AAG: DIG is from head office

CJI: Is there any request by state to hand this over to CBI?

Salve: entirely in your lordships hand. state has not made such a request. pleas have this on reopening. If you are not satisfied with progress hand it over to CBI

Salve: if the person does not come rigour of law will take recourse

CJI: Is it the same way we treat other accused too? like sending notices etc..

CJI: this is opinion of bench.. this is a responsible state govt and police, when there is as serious allegation of death or gun shot injury.. will the accused in this country be treated the same way?

Salve: I was told post mortem did not show gun shot injury

CJI: So this is a ground for not taking custody of the accused

Salve: they have found two cartridges, may be he had a bad aim and he missed it

CJI: the way its proceeding it seems its not serious

Salve: please take this up on 18th.. action is being taken at the highest level

CJI: Action is only in words here

Justice Hima Kohli: proof of the pudding is in the eating.

Salve: You had issued notice...

CJI: We did not, we sought a status report..

Salve: the young man who is being targeted..

CJI: the charges are very serious

Salve: we have given him notice. He has to show up at 11 am tomorrow

Sr Adv Harish Salve: please give me 30 seconds, i will log in from another laptop

CJI: we can only see your blue folder

Adv Agnish Aditya: i want to mention something in relation to this matter

CJI: We have received hundreds of emails. First we will hear the state counsel

UP AAG: Sr Adv Harish Salve is leading me today

Sr Adv Salve arguing in some other court

UP AAG: Please pass this over.

CJI: Pass it over

Matter to be taken up shortly