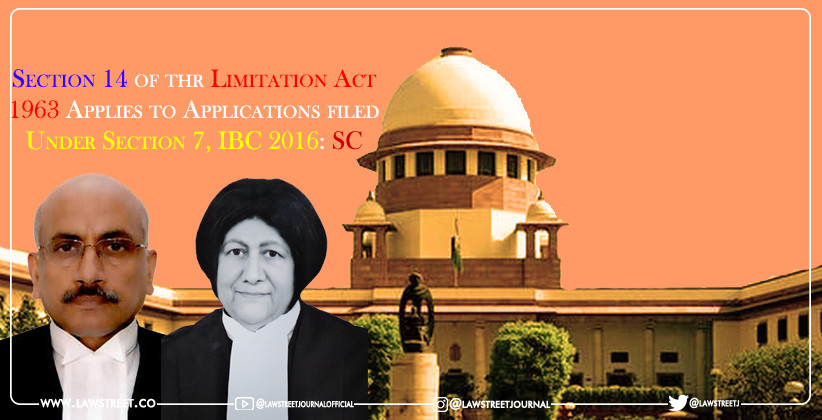 In an application under Section 7 of the Insolvency and Bankruptcy Code, 2016 the applicant can claim the benefit of Section 14 of the Limitation Act, in respect of proceedings under the SARFAESI Act, 2002.
The bench also held that:

SAFAESI proceedings are 'civil proceedings' for the purposes of Section 14 of the Limitation Act, 1963. It was further held that that there is no rule that the exclusion of time under Section 14 of the Limitation Act, 1963 (which allows for exclusion from the limitation period the time spent litigating before wrong forum) is available, only after the proceedings before the wrong forum terminate.  Background of the case: The National Company Law Appellate Tribunal (NCLAT) rejected the contention raised by Corporate Debtor that since the account of the Corporate Debtor had been declared NPA on 31st March, 2013 and since the application under Section 7 of IBC had been filed on 27th August, 2018, after almost five years and five months from the date of accrual of the cause of action, the application filed by financial creditor is barred by limitation.

The NCLAT held that, the applicant, the financial creditor, had bona fide, within the period of limitation, initiated proceedings against the Corporate Debtor under the SARFAESI Act, 2002 and was thus entitled to exclusion of time under Section 14(2) of the Limitation Act.

“A  plain reading  of  Section5  of  the Limitation  Act  make sit amply  clear  that,it  is  not mandatory  to  file an  application  in writing before  relief  can  be  grant edunder  the  said section.    Had  such an application  been  mandatory,Section  5  of the  Limitation  Act would have  expressly      provided so.    Section  5would  then  have read  that the  Court might  condone  delay beyond  the  time  prescribed  by limitation for  filing  an application  or  appeal,if  on  consideration of  the application    of   the    appellant  or the  applicant,  as the  case  maybe, for   condonation   of   delay,   the   Court  is   satisfied   that  the appellant/applicant  had sufficient  cause  for not  preferring  the appeal or  making  the application  within  such period. Alternatively,  aproviso or  an  Explanation would  have  been added  to  Section5,  requiring  the appellant   or  the  applicant,   asthe  case  maybe,  to  makean application  for  condonationof  delay.    However,the  Court  canalways insist  that  anapplication  or  an   affidavit  showing  causefor  the  delay befiled.  No  applicantor  appellant  canclaim  condonation  ofdelay under  Section  5of  the  LimitationAct  as  ofright,  without  makingan application.”

The bench also noted that the IBC does not exclude the application of Section 6 or 14 or 18 or any other provision of the Limitation Act to proceeding under the IBC in the NCLT/NCLAT.

All the provisions of the Limitation Act are applicable to proceedings in the NCLT/NCLAT, to the extent feasible, it said.

The bench further observed that substantive provisions of Sub-sections (1), (2) and (3) of Section 14 do not say that Section 14 can only be invoked on termination of the earlier proceedings, prosecuted in good faith.
Further, regarding the contention relying on NCLAT judgment in Ishrat Ali case, the bench observed that there is no rationale for the view that the proceedings initiated by a secured creditor against a borrower under the SARFAESI Act for taking possession of its secured assets, were intended to be excluded from the category of civil proceedings. While dismissing the appeal, the bench observed:

If,  in  the context  of  proceedings under  Section  7or  9  of  the IBC,   Section  14were  to  be interpreted  with  rigidand  pedantic adherence  toits  literal  meaning,to  hold  thatonly  civil  proceedings in Court  would  enjoy exclusion,  the  result would  be  that an  applicant would  not even  be  entitledto  exclusion  ofthe  period  oftime  spent  in bonafide  invoking  anddiligently  pursuing  anearlier  application under  thesame  provision  ofIBC,  for  thesame  relief,  beforean Adjudicating  Authority,  lackingterritorial  jurisdiction      Thiscould  not possibly have  been thelegislative  intent.

In our considered opinion, the judgment of the NCLAT in the case of Ishrat Ali is unsustainable in law. The proceedings under the SARFAESI Act, 2002 are undoubtedly civil proceedings.
At the end, it was observed that the expression 'Court' in Section 14(2) would be deemed to be any forum for a civil proceeding including any Tribunal or any forum under the SARFAESI Act, 2002. The counsels in the case were Senior Advocate Siddhartha Dave and Advocate Sai Deepak.   [READ JUDGMENT]