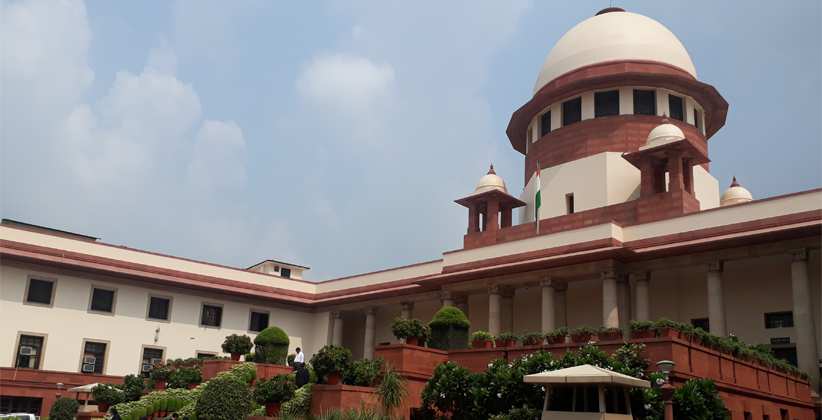 A full Bench of Supreme Court presided by Justice A.M. Khanwilkar and comprising Justices Indira Banerjee and Dinesh Maheshwari, has on June 05, 2020, held that the limitation period under Article 113 of the Limitation Act, 1963, which is a residuary clause, begins when the right to sue accrues and not when the right to sue "first" accrues.

Judgment to this effect was authored by Justice A.M. Khanwilkar and passed in the matter of Shakti Bhog Food Industries Ltd. v. The Central Bank of India & Anr.

The case of the appellant was that it was the manufacturer of wheat flour and other items and it had been selling its goods to various purchasers who used to make the payments through cheques and drafts. The appellant would deposit/lodge those cheques/drafts with the respondent bank on having paid the charges for interest/commission and the appellant was availing local cheques/drafts discounting facility to the extent of Rs. 25 Lakhs in its Account maintained by the respondents. Somewhere in July 2000, the plaintiff/appellant had noticed that the respondents had charged interest/commission @ Rs. 4/- per thousand on local cheques/drafts in violation of the understanding and the said overcharge was made from 2000-2001 and as such, the appellant had approached the respondent no. 1 vide letter dated July 09, 2001, informing thereby about the extra charges. It had been alleged that the Senior Manager of respondent no.1, who was also respondent no. 2, had vide his letter dated May 08, 2002, refuted the claim of overcharging, and therefore, the appellant wrote letters in July and September 2002 and also in March 2003 and thereafter filed the suit in February 2005. As per the appellant's version, the claim to file the present suit arose on or after May 08, 2002, when its claim was not acceded to.

The Trial Court had dismissed the suit with the observation that the suit was patently barred by law of limitation and as such, the application of the defendant made under Order 7 Rule 11 Civil Procedure Code, 1908 (CPC) was allowed and the plaint of the plaintiff was rejected.

The plaintiff had sought two reliefs i.e. rendition of account and repayment of excess money. Limitation Act, 1963 does not provide any specific article with regard to the period within which accounts can be sought by a party from its bank. Hence, Trial Court relied on Article 113 of Limitation Act which provides a limitation period of three years for suits for which no limitation period is provided, from the date when the right to sue to accrue. Based on the averments made in the plaint that the local cheques/drafts discounting facility to the extent of Rs. 25 lacs was extended w.e.f. the month of November 1997 to December 1999, the Trial Court held that the alleged amount so charged by the defendant from the plaintiff, in excess from the agreed amount, was till December 1999, hence right to suit accrued in favor of the plaintiff in December 1999, thus, the plaintiff could have filed the present suit i.e. for the rendition of account and repayment of the excess amount till December 2002.

Trial Court also relied on C.P. Kapur vs. The Chairman & Ors. [(2013) 198 DLT 56], wherein Delhi High Court had held that exchange ofcorrespondence between the parties cannot extend the limitationperiod for the institution of a suit.

The Counsel for the appellant had contended that, prior to the communication dated May 08, 2002, there was no occasion for the appellant to file the suit and it was only on the refusal by the respondent bank to rectify the error that the cause of action to file the suit arose. Upholding the findings of the Courts below, the HC held that the communications by the appellant or the service of legal notice did not extend the period of limitation for the institution of the suit.

The appellant had relied on Articles 2, 3, and 22 of the Limitation Act to urge that the suit filed in February 2005 was within limitation. This plea, however, had not impressed the trial Court, the first appellate Court or the High Court.

At the outset, the SC noted that,

“From the trial Court judgment, it is evident that the trial court did not make any attempt to analyze the plaint in the manner predicted in the aforesaid decisions. Even the District Court dealing with first appeal and the High Court with the second appeal omitted to do so. It is the bounden duty of the Court to examine the plaint as a whole and not selected averments therein.”

Regarding the scope of Article 113 of the Limitation Act, the Court held that,

“The expression used in Article 113 of the 1963 Act is “when the right to sue accrues”, which is markedly distinct from the expression used in other Articles in First Division of the Schedule dealing with suits, which unambiguously refer to the happening of a specified event. Whereas, Article 113 being a residuary clause and which has been invoked by all the three Courts in this case, does not specify happening of a particular event as such, but merely refers to the accrual of a cause of action on the basis of which the right to sue would accrue.”

“The distinction between Article 58 and Article 113 is, thus, apparent in as much as the right to sue may accrue to a suitor in a given case at different points of time and, thus, whereas in terms of Article 58 the period of limitation would be reckoned from the date on which the cause of action arose first, in the latter the period of limitation would be differently computed depending upon the last day when the cause of action therefore arose.”

Regarding the appellant’s right to sue, the Court observed that,

“the assertion in the plaint is that the appellant verily believed that its claim was being processed by the Regional Office and the Regional Office would be taking an appropriate decision at the earliest. That belief was shaken after receipt of a letter from the Senior Manager of the Bank, dated 8.5.2002 followed by another letter dated 19.9.2002 to the effect that the action taken by the Bank was in accordance with the rules and the appellant need not correspond with the Bank in that regard any further. This firm response from the respondent Bank could trigger the right of the appellant to sue the respondent Bank.”

Allowing the appeal, restoring the file of the trial Court to its original number, the Court directed the Trial Court to proceed in accordance with the law to dispose of the suit.