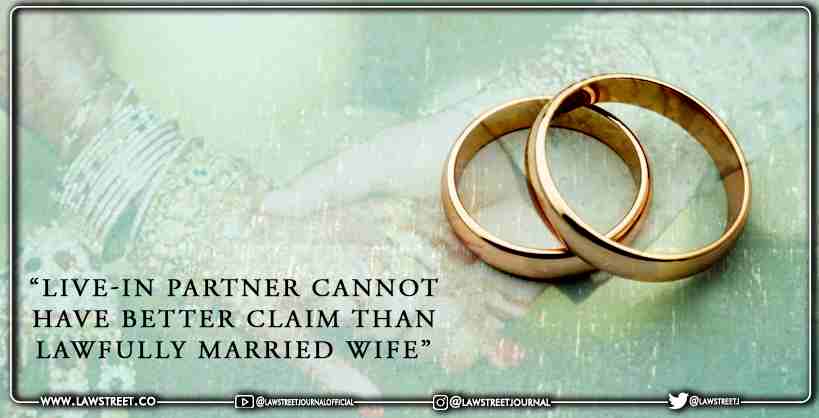 While deciding a matrimonial appeal, a Division Bench of the Kerala High Court announced that when there is evidence of long cohabitation with two women simultaneously, one pursuant to a ceremonial marriage and the other not so, the presumption of valid marriage leans in favour of the former.

Division Bench of Justice A. Muhamed Mustaque and Justice Kauser Edappagath observed, “It is true that the parties to a live-in relationship or non-formal relationship who have lived together for an extended period of time could be brought within the purview of laws relating to maintenance and domestic violence and could be considered as husband and wife for the said limited purpose. But, parties to such a relationship cannot be elevated to marital status. A female partner in a live-in relationship cannot have a better claim than a legally married wife.”

The appellant Rajeeve approached the Court aggrieved by the order of a Family Court disentitling her of family pension and other death benefits of a late government employee, who she claims to be her husband.

The brief background of the matter is that an employee of South Western Railways, S. Reghunathan passed away on 31/1/2009 while in service. After his death, both the appellant and the respondent raised rival claims before the Railways for his service benefits. Both of them claimed to be the legally wedded wives of late Reghunathan and with two children each born in their respective wedlock. As such, they asserted their entitlement to receive the family pension and other service benefits of the deceased.

Subsequently, the respondent filed a petition before the Family Court to declare her as the wife of late Reghunathan and sought a permanent prohibitory injunction to restrain the authorities from disbursing family pension and other benefits to the appellant.

The Family Court granted the above-mentioned reliefs through its judgment. The present appeal has been filed challenging the said judgment.

The question that rose for consideration before the Bench was who among the appellant and the respondent was the legally wedded wife of the deceased Reghunathan. The Bench upon analysis and consideration of the oral and documentary evidence produced by both sides opined that there was concrete evidence to prove the valid marriage between the respondent and late Reghunathan and the pursuant long cohabitation between them.

On the other hand, the evidence tendered by the appellant was found to be weak, shabby and insufficient to prove her case.

The Division Bench admitted that generally, long cohabitation of a man and woman for a number of years may raise the presumption of valid marriage, unless proved otherwise.

The Bench stated thus, “It is true that the parties to a live-in relationship or non-formal relationship who have lived together for an extended period of time could be brought within the purview of laws relating to maintenance and domestic violence and could be considered as husband and wife for the said limited purpose. But, parties to such a relationship cannot be elevated to marital status.”

The High Court asserted that the Family Court was absolutely justified in declaring the respondent as the legally wedded wife of late Reghunathan. However, the appeal was only allowed in part. Two other findings of the Family Court were found to be erroneous and set aside by the Division Bench. They are as follows:

Therefore, the appellant’s children are not entitled to the properties including the death benefits of late Reghunathan was set aside, and Railway authorities were given the liberty to decide the same in accordance with law.

Prohibitory Injunction Set Aside: The Family Court had declared a prohibitory injunction against the Union of India and authorities from South Western Railways from disbursing death benefits to the respondent. However, the court observed that this dispute was between the appellant and the respondent regarding their marital status. The presence of the other parties was irrelevant to the substance of the matter.

Moreover, the Railway authorities were given the liberty to take a decision on the entitlement of the death benefits of late Reghunathan. For that reason, the court found that the relief of permanent injunction granted by the Family court against a party outside the matrimony is uncalled for and was accordingly set aside.