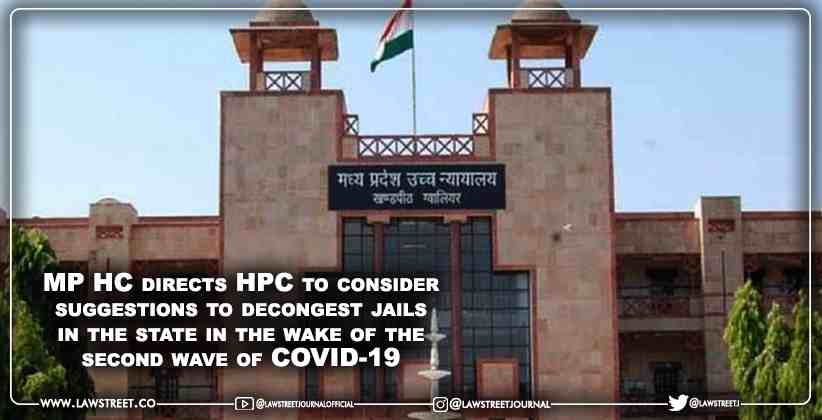 A bench of the Madhya Pradesh High Court comprising Chief Justice Mohammed Rafiq and Justice Atul Shreedharan, on Monday, May 17th, 2021 observed in the Suo Moto writ petition, initiated in view of the unprecedented situation faced by the country to decongest the jails.

In this regard, the Madhya Pradesh High Court directed the High-powered Committee to consider the suggestions received by it and make its recommendation about release of prisoners. It was observed that the number of prisoners lodged in the different jails of the State of Madhya Pradesh, which was 45,582, is not going to be substantially reduced.

The suggestions, thus made in the wake of the situations, may not achieve and it was suggested that the High-Powered Committee ought to consider recommending the release of all such convicts on parole, who have either served out one third of the substantive sentence awarded to them or if sentenced to life imprisonment have completed incarceration of seven years or more.

The Senior Counsel and the Amicus Curiae suggested that the High-Powered Committee ought to also consider recommending release of all such under-trial prisoners on interim bail, who are facing trial for offences exclusively triable by the Court of Magistrate regardless of the outer limit of sentence.

Additionally, in the third put forth to the High-Powered Committed was recommended to release all women prisoners, both convicts and under rial regardless of the offence for which they have been convicted and the maximum sentence that may be awarded to them upon conviction.

The court directed that the data falling under the aforementioned category be provided to the High-Powered Committee and it shall convene a meeting and take into account the aforementioned suggestions while giving its recommendation.

Chander Uday Singh, Senior Counsel and Sankalp Kochar, Amicus Curiae, apprised the court that despite directions issued by the Supreme Court in Arnesh Kumar case, the police in the state were not following the guidelines.

The court directed the Director-general of Police to immediately issue fresh directions to all the Police stations in the state to adhere to the guidelines issued and observed that in case of any arrest made without adherence to the guidelines, the accused concerned would be entitled to directly apply to the court of competent jurisdiction for his regular bail on this ground alone.

The Court directed the Registrar General of the High Court to again circulate the copy of the judgment of the Supreme Court in Arnesh Kumar along with copy of the new order of the High Court to all District Judges of the state, being served upon the Judicial Magistrate and also asked the Director of State Judicial Academy to organize online/virtual program, in a cluster of districts or division-wise, in batches for sensitizing, not only the Judicial Magistrate, but also the police officers.

The Court directed the Member Secretary of the MP State Legal Service Authority to require the Member Secretaries of all DLSA to move applications through their Legal Aid Counsel before the respective Juvenile Justice Board on behalf of the children on conflict with law, for their release from Observations Home across state. The applications should be considered and the same shall be decided within a period of three days from the date of filing in the light of the observations made by the Supreme Court, taking the proviso to Section 12 of Juvenile Justice Act into consideration.