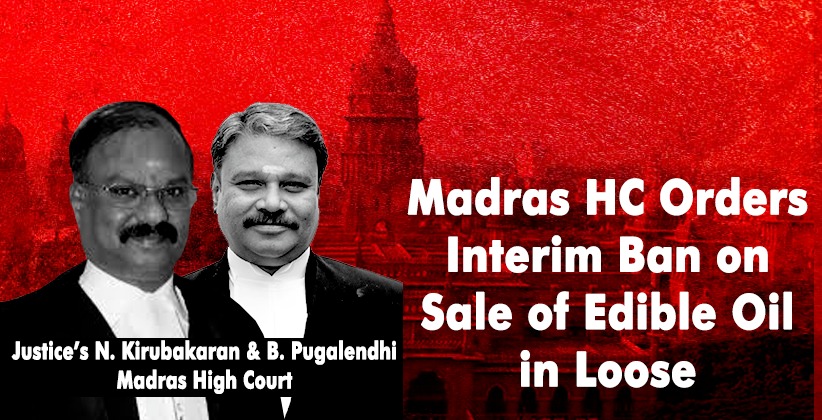 Judiciary Dec 22, 2020 Mriganc Mishra Intern Aquilas Legal Solutio ( Editor: Ekta Joshi ) 11 Shares
11 Shares
While observing that the edible oils (sold in loose packets) are mostly adulterated and that it would have "serious consequences on the health of the consumers", the Madras High Court on Friday (18th December 2020) passed an interim order banning the sale of edible oil as loose oil.

The Bench of Justice N. Kirubakaran and Justice B. Pugalendhi was hearing a PIL filed by a practising Advocate seeking direction for the respondents to ensure that the edible oils sold in the market are in accordance with FSSAI standards and norms and for appropriate action as against the adulterators. The Counsel representing the petitioner submitted that the edible oils available in the market are mostly adulterated and he also demonstrated as to how the adulterations are made. He told the Court that by mixing a portion of Cashew Nut Shell Liquid (CNSL) in Palmolein, the Palmolein could be made equivalent to Gingelly Oil and the colour and odour will also match the same.

He also informed the court that consuming CNSL (Cashew Nut Shell Liquid) would affect the nerve system and concentration ability, ie., would affect the Autonomic Nervous System (ANS) causing adverse effects, including, Blurring of vision, Nausea, Vomiting, Dizziness, Headache, Bradycardia (Decrease in Heart Rate) and Hypotension (Fall in Blood Pressure). Importantly, it was informed to the Court that the re-use of Tin & Plastic containers for edible oils & fats is not allowed as per Food Safety and Standards (Packaging and Labelling) Regulations, 2011 prohibit. However, it was submitted, the proviso to rule 2.3.15 allows the State to exempt any oil from the application of this rule, by way of a gazette notification. To this, the Bench observed that the food adulterers took advantage of this proviso as the State has permitted the sale of edible oil in loose packets without assigning reasons for it. The Courts observations have been discussed in the ensuing paragraphs:

“The data placed before us is shocking that if an essential commodity like edible oil can be adulterated to this extent, we are afraid of the consequences on the health conditions of a common citizen.”

The Court also remarked that Right to life is a fundamental right, guaranteed under Article 21 of the Constitution of India and right to have a healthy food is also one of the fundamental rights. The Court further said,

“It is the duty of the Government to ensure that the people are getting healthy food without any adulteration. The very object behind the enactment of Prevention of Food Adulteration Act, 1954, now amended as Food Safety and Standards Act, 2006, is to enhance the quality standard and to ensure the availability of quality food for all citizens.”

“This Court is of the opinion that those who are involved in adulteration, i.e. the adulterators, be it the Manufactures/Distributors/Sellers, should be termed as ‘Goonda’ as per the definition in Section 2 of the Tamil Nadu Act, 14 of 1982, by amending the provisions to include them and should be detained under the Act 14 of 1982”

Considering the consequences of adulterated edible oils and the modes available for adulteration, the Court, among others, raised the following queries to be answered by the respondents 1 to 3 & 5: