Advocate Who Acted Professionally as Per Client's Instruction Cannot Be Made Criminally Liable for Defamation: Madras HC 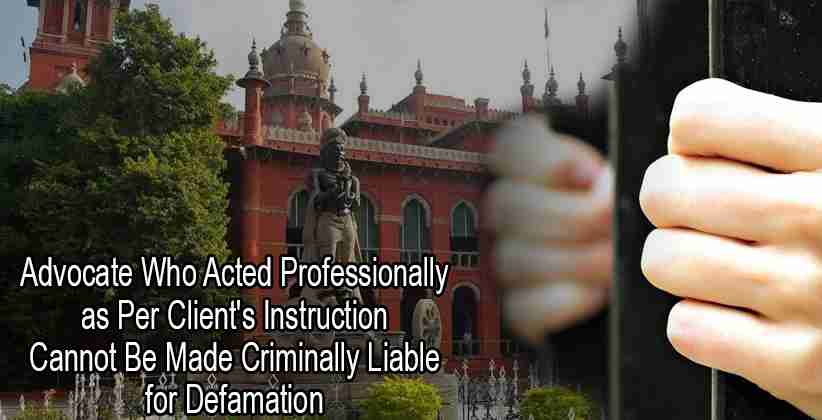 Judiciary Oct 05, 2020 Rocky Das ( Editor: Ekta Joshi ) 6 Shares
6 Shares
Recently, Madras High Court in a case for hearing before it held that, an advocate who acted professionally as per the instruction of his or her client cannot be made criminally liable for offence of defamation under Section 500 unless the contrary is alleged and established. A criminal defamation case was filed against the lawyer and the committee of the creditors alleging that the statements made in the application were defamatory.

In this case, the lawyer and other accused approached the High Court seeking to squash the complaint and filed an application on behalf of the committee of the creditors to remove the complainant and seeking appointment of another Resolution Professional under section 27 of the Insolvency and Bankruptcy Code, 2016. Rahul Tamaskar, Advocate for the petitioner contended that the petitioner was acting strictly in the performance of his professional duty and he enjoyed privilege while acting as such. The High Court was of the view that the petitioner was liable to be given benefit for the ninth exception (imputation made in good faith by a person for the protection of his or others' interests) to section 499 (defamation) IPC. It was also noted that the petitioner drafted the plaint on the basis of information provided by his client, the plaintiff.

The Madras High Court observed, “that an Advocate who acted professionally as per the instruction of his/her clients, cannot be made criminally liable for the offence of defamation under section 500 IPC unless the contrary is alleged and established”. Referring to a judgment in Ayeasha Bi Vs. Peerkhan Sahib reported in AIR 1954 Mad 741, Justice GK Ilanthiraiyan, observed:

‘It is held that a lawyer is an advocate, one who speaks for another. Naturally beyond what his client tells him the lawyer has no opportunity to test the truth or falsity of the story put forward by the client. Therefore no lawyer could ever be prosecuted for defamation in regard to any instructions which he might have given to his lawyer because it is the lawyer's business to decide whether he could properly act upon the instructions and whatever responsibility might ensue from acting upon that instruction would be his, and no one else's is opposed to the entire trend of decisions defining the scope and extent of the privilege conferred upon the lawyer’.

In such view of the matter, the criminal proceedings pending against the petitioner before the Court of Chief Judicial Magistrate, Jabalpur was quashed. [Arun Thakur v. the State of Chhattisgarh, decided on 10-05-2019] The Hon'ble Supreme Court of India and also various High Courts repeatedly held that an advocate who acted professionally as per the instruction of his or her client cannot be made criminally liable for offence of defamation under Section 500 unless the contrary is alleged and established. The court then quashed the entire complaint observing that allegations made in the application filed on behalf of the members of COC are not defamatory in nature.