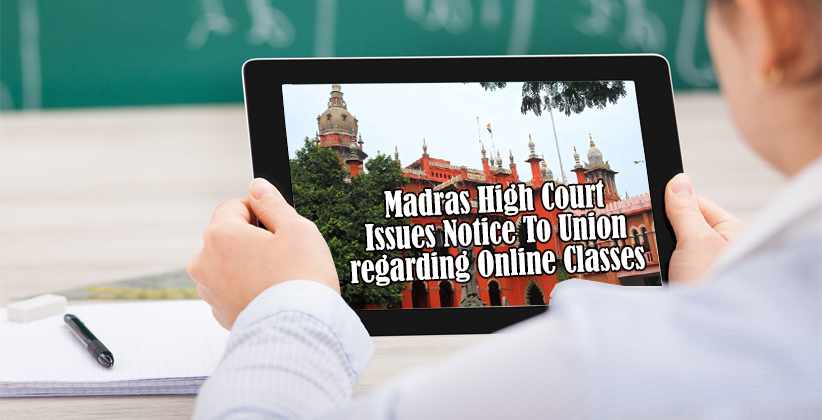 Judiciary Jul 22, 2020 Tanurag Ghosh ( Editor: Ekta Joshi ) 2 Shares
2 Shares
Tamil Nadu is the second worst-hit state by the COVID-19 pandemic. With more than 48,000 cases, the daily routine of the entire population has come to a grinding halt. The state government is taking measures to ensure that the outbreak is controlled. Significant steps like the imposition of a strict lockdown in the major city of Chennai have been ordered.

At such a time, essential activities have been consistently trudging along. One of the most important activities, i.e., the dispensation of education has shifted entirely to online platforms. Schools are now using methods of videoconferencing to make sure students attend classes. Authorities did not notice a critical issue with this mechanism. This issue concerns young children on internet platforms.  With impressionable minds and almost no regulation on what kind of internet pop-ups arrive on the screen, it has become a significant issue. Taking cognizance of this issue, the state government of Karnataka has ordered that online classes should not take place for children in grades LKG to V. Other state governments have also constituted committees to deliberate upon a solution for this situation.

With regards to Tamil Nadu, a petition was filed in the High Court of Madras regarding regulation for online classes. The petition contended that under Article 226 of the Constitution of India, conducting online classes in the absence of laws that keep a check on the material being circulated among the students is unwarranted. It also claimed that conducting classes without the requisite laws is not congenial for the purpose of education. It contended that there exist grey areas in the rules, namely- The Bench comprising of Justice Vineet Kothari and Justice R Suresh Kumar issued a notice to the Union government, Ministry of Information and Technology, Computer Emergency Response Team, and other authorities considering it a matter of enormous public importance.  The Bench, however, did not grant any interim relief to the petitioner and consequently allowed schools and colleges to conduct online classes for the time being. The Court remarked: "There are no guidelines restricting or checking the material which pops up on the screen which may not be congenial for the education of the students, who are constrained to undergo Online Education." The next hearing on the matter will take place on 25th June 2020, where the union government would provide a reasonable solution and a final decision will be made regarding online classes, which have become the new “normal” in the pandemic.