Magazine covers not sufficient evidence to demonstrate that wife who is modeling can sustain herself: Delhi High Court 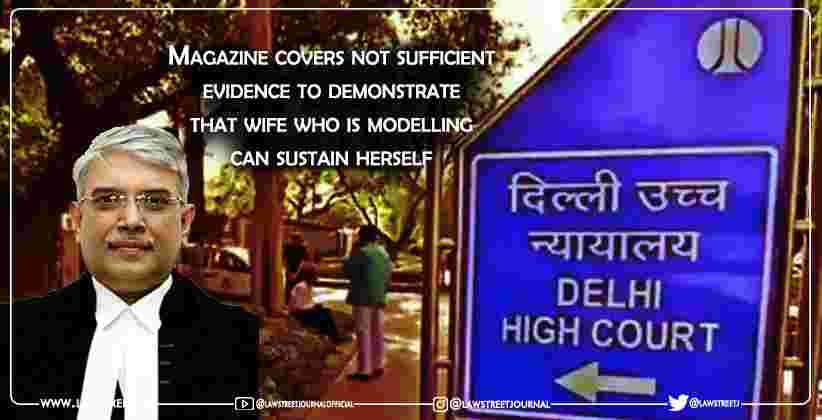 Judiciary Apr 09, 2021 Nargis Bano ( Editor: Ekta Joshi ) 56 Shares
56 Shares
In a maintenance proceeding, the Delhi High Court recently held "that the burden of proof to prove that the wife can maintain herself is on the husband." Simply showing magazine covers depicting that the wife is into modeling cannot be accepted as valid evidence.

A Single Judge Bench Justice Subramonium Prasad has passed an order to this effect.  In the present case, the petitioner- husband, and respondent-wife had got married in 1985 but were living separately since 2021.

The Petition is filed by the wife- respondent under Section 125 of Code of Criminal Procedure (CrPc) for the grant of maintenance. The petitioner had claimed that in 2012 she was thrown out of the house.  The family court had fixed the amount of Rs. 17,000 per month to be paid to the respondent.  The husband-petitioner challenged the above decision of the family court before the High Court. The petitioner highlighted that under Section 165 of the Indian Evidence Act, the respondent-wife has herself revealed that she was into modeling.  Therefore, the burden of proof is on the respondent to prove that she could not maintain herself, as the income earned by her was so less.  In order to establish that the respondent was employed and capable of maintaining herself, the petitioner produced certain covers of magazines and paper articles before the Court.  In view of the law laid down by the Supreme Court, the High Court observed that,

"In order to remedy or reduce the economic sufferings of a woman who is forced to leave her matrimonial house, Section 125 of the CrPc is enacted".

The Court said that it is the duty of the husband to maintain his wife and to provide economic support to her and their children, except in the case where the legally permissible ground is contained in the law.  In order to prove that the respondent is earning sufficient income to maintain herself, nothing has been filed by the petitioner except few magazine covers and newspaper clippings.  It was concluded that in the present case, there had been no divorce between the petitioner- husband and respondent-wife, and both of his sons were majors and well employed.

The Court held that since the petitioner was working as Assistant Sub Inspector (ASI), therefore it is the moral and the legal obligation of the petitioner to maintain the respondent.

The Court further said that the petitioner was not able to point out any perversity in the impugned order. No material has been placed on record to show that the respondent is able to sustain herself.   Accordingly, the challenge of the petitioner was dismissed.