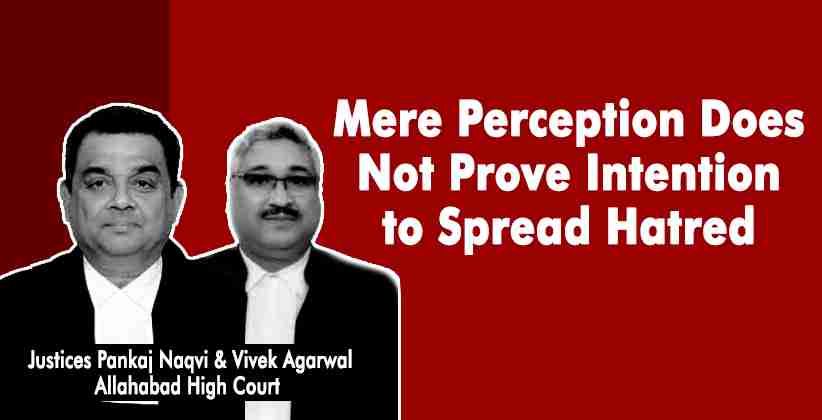 Judiciary Dec 02, 2020 Dev Kumar Patel ( Editor: Ekta Joshi ) 8 Shares
8 Shares
While quashing an FIR under Section 66 of the Information Technology Act, 2000 & Section 505 of the Indian Penal Code, 1860, the Allahabad High Court stated that this provision is not meant to be invoked on the basis of sentiments of a weak/sensitive person.

The Division Bench of Justice Pankaj Naqvi and Justice Vivek Agarwal was hearing a writ petition filed to quash the FIR lodged by P.S. Badhalganj, Gorakhpur on receiving information from the informant, a “Kshatriya” under section 66 of the IT Act, 2000 & 505 IPC, 1860. The informant was aggrieved with the publication of a post on the Facebook account of the Manurojan Yadav which he found to be objectionable as the same was posted with a view to spreading disharmony at the instance of Samajwadi Party leaders as also the Chairman of Zila Panchayat.

The screen shot generated by the petitioner on his Facebook account read as “Marwadi Raja Maharana Pratap ko purane itihaskar IT Cell ne Rajpoot Kshatri batakar itihas me maarwadiyo ke sath anyay kiya” Section 66 of the I.T. Act, 2000 relates to punishment for a computer-related offense which provides that if any person dishonestly or fraudulently does any act referred to in Section 43, he shall be punishable with imprisonment up to 3 years or with a fine which may extend up to Rs.5 lacs After analyzing section 43 of the IT Act the bench finds that “the overt act attributed to the petitioner does not relate to any of the clauses of Section 43 as the same relates to damage to the computer system”

To relate any connection under Section 505 IPC, the bench relied on judgments of Manzar Sayed Khan vs. the State of Maharashtra and another, (2007) 5 SCC 1 Bhagwati Charan Shukla vs Provincial Govt., AIR 1947 Nag 1, thereafter this bench observed that “words spoken or written must be with the intent to create/promote or likely to create/promote feelings of enmity, hatred or ill-will between two factions separated by religion/caste/language/region/communities. Opinion about a historical fact could be a matter of perceptions. Two historians may not be on the same page on a historical event. A discordant view per se would not attract the offense under Section 505(2) IPC as the same would be saved by Article 19(1)(a) of the Constitution i.e. fundamental right of freedom of speech and expression”.

The bench also noted that mens rea is an important element to attract this provision and the same is lacking. The bench quashed the FIR stating that “neither any offense under Section 66 of the I.T. Act nor under Section 505(2) IPC is made out”