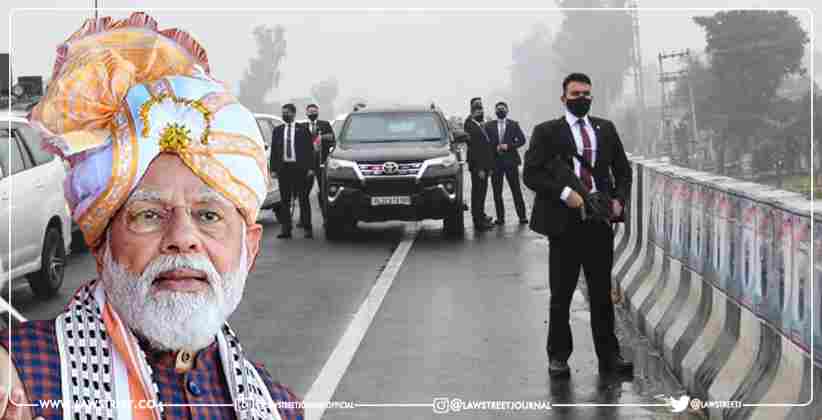 Supreme Court begins hearing the PM security breach issue during his recent visit to Punjab. Senior Adv Maninder Singh appearing for the petitioners says it’s not just a law and order issue but an issue under the SPG Act.

Sr Adv Maninder Singh: this is not a law and order issue but it falls under the special protection group act. its just now about law and order in the state. please see section 14 of SPG Act

Singh: it is the duty of centre and state or the UT and other local authority to act in aid of the director of any member of the SPG. This was considered in a judgment of the SC where a former PM participated in a corruption trial case

Singh: SC had said that even if the pm wants to waive off the protection under SPG Act he cannot do so. the act does not even permit this.

Singh: under the SPG act it is not issue of state subject or law and order. issue of PM protection is a national security issue and comes under parliamentary purview. in this trip there was an impermissible stoppage of PM Cavalcade and this is highest breach. this cannot happen

Singh: this is not an law and order issue and breach is visibly seen in public domain. this needs to be professionally investigated. Here probe cannot be done by state. Please see the compilation where state has ordered a probe after this plea was mentioned yesterday

Singh: state is no exclusively empowered to probe and this is not an law and order issue. the chairman of the state appointed committee was a part of a huge service related scam. police authority had also probed the conduct of this judge.

Singh: SC had earlier held that this judge had targeted police officer who had probed his own case. need of the hour is entire document of this entire journey needs to be taken into custody. Bhatinda District judge along with NIA officials can look into this

Singh: the probe must be under evidence protected and it needs to be done efficiently by rising above centre and state politics. with your lordships interference the probe should go on and the district judge should collect evidence under security of NIA

Singh: SC should lay down guidelines on how such issues have be handled. Bhatinda district judge should be allowed to collect and preserve evidence.

SG Tushar Mehta for Centre: I am grateful to this court for taking cognisance of this rarest of rare case which caused international embarassment. Whenever the cavalcade of PM travels on road, the DG Of state inspects the road to see if PM can travel. here DG have a green signal

SG: There is also a warning car ahead of PM's car so that in case there is a threat perception the cavalcade can be stopped. Here local SP can be seen sipping tea with protesters and warning car was not informed.

SG: Here cavalcade was in the flyover and if the protesters would have gathered in the back of the flyover imagine what would have happened. Here there was a mob and shouting.

SG: Another organisation Sikhs for Justice had called for people to do XY thing and this can be an issue of Cross border terrorism. This matter cannot be left to just anyone and thus let it be with an district judge but with NIA official

SG: There are often wireless and fax messages and judicial officer would not know the details. There is cross border terrorism and hence NIA official should be there. Here the Punjab Govt committee cannot proceed as its after your order and its an act of over reaching this court

SG: This is a sui generis case of the international embarrassment of the Prime Minister of the country. please call for details and keep it in the sealed cover. signal must go from highest country so that this cannot continue.

AG Punjab: Punjab is not taking this case lightly. The committee was constituted on the same day when incident happened on January 5 and it was not an after though and retired HC judge was appointed. We have also lodged an FIR yesterday.

AG Punjab: after this matter was mentioned, Centre has also formed a committee to probe the matter. I am not joining issues any one issue. I am open to say that any person can be appointed to investigate the matter, if there is lapse matter needs to be probed

AG Punjab: if there are allegations against the judge we appointed, i cannot argue one way or another. in case you hold that committee by us is a suspect. The IG of SPG is a member of the centre committee was also responsible for this and cannot be a judge in their own cause

AG Punjab: we are not joining issues. Our CM has said that Mr Modi is our Prime Minister. even though the petition reeks of politics we are not against it.

Sr Adv Singh: that means state does not have any objection to freezing and collecting of evidence. When we said committee is a suspect I am referring to your judgment and observations made by the top court

CJI: This is not the issue

CJI: Mr Mehta, you have heard both petitioner and Punjab AG. Issue is about preservation of record there is no issue. State is offering that any other commission can be set up and they also have reservation about your commission

SG: He can be replaced by the Home Secretary

CJI: But if you both appoint commissions

SG: These are committees..

CJI: Whatever ultimate goal is to look into lapses

SG: we are more on the administrative issue of lapses not on why it was deliberate etc

Punjab AG: Lapses will ultimately fall on someone whether SPG or punjab police. but probe has to be done and justice must not be done but also seen to be done. if some officer has to face flak they has to face. But Mr Mehta saying its a simple innocuous committee is not correct

Punjab AG: let this be a totally independent committee.

CJI: Mr Mehta do you want an independent committee

SG: Let everything be before you by tomorrow with records collected and we will place our individual concerns by tomorrow and you can look into it on Monday

SC ORDER: Taking into consideration the arguments advanced.. for the time being and in view of the issue regarding security of the PM of country... we deem it appropriate to direct the Registrar General of Punjab and Haryana HC to secure and preserve the travel records of PM

SC ORDER: Forthwith we direct Punjab and police officers and SPG and other centre and state agencies to cooperate and provide necessary assistance to the registrar general. we direct registrar general to keep all records in his safe custody

Sr Adv Singh: the state committee will be giving a report in 3 days they should rest now

Punjab AG: Both Centre and State committees should hold their horses till Monday and we can proceed according to the directions of this court

SG: There needs to be some experienced man to assist the registrar general like from where to get the movement register and the wireless messages.

CJI: Thats why in our order we have mentioned that the agencies have to assist

SG: But they can only assist when they are called

Justice Surya Kant: The Director General of police Chandigarh be the nodal officer

CJI: okay we will say both DG Chandigarh UT and an officer from NIA can be nodal officers

CJI: Now Mr Mehta both committees should not function till Monday

SG: We are on another issue

CJI: But if you take action regarding some officer etc then..

SG: We are only on who designed the route and how was it done etc.

CJI: ask both the committees to hold their operations till Monday. this will not be in order but its understood

AG Punjab: i will communicate to our officers

SG: it will be done