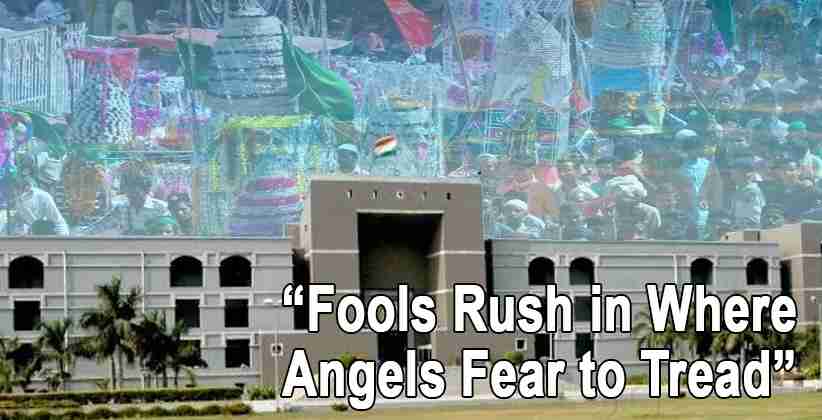 “Fools rush in where angels fear to tread” - This phrase alludes to inexperienced or rash people attempting things that more experienced people avoid.

And in expressing similar thoughts, Gujarat HC expressed its anguish against the Muharram procession amid the pandemic. A writ petition filed in public interest by a practicing advocate asked for the relief to direct the public authorities and administrative bodies to take the action against the erring officers, who have allowed the procession to take place in the city of Khambhat.

The petitioner submitted that people of the city of Khambhat on 30.08.2020 took out a procession of Muharram in spite of the fact that there are several Notifications, which have been issued by the Government authorities for not permitting to assemble in large numbers. To show that the people had gathered in large numbers, photographs of the said procession were annexed with the petition.

“We fail to understand why people had to do this at the risk of their own lives. All those who participated in the procession not only put their own lives in danger but also that of their family members who may be at their respective homes”. The Court remarked.

Importantly the Court observed that “It is too late for this Court reprimand all those persons who joined the procession because the Muharram is over. However, if the photographs annexed with the petition reflect actual happening of the gathering and the procession then it is a serious matter for concern.”

The Court further opined that “We propose to take serious notice for this rash act on the part of the people by putting a straight question to the local administration, more particularly, the police machinery as to what they were doing on that particular day and date when thousands of people flocked at the mosque situated in the town and took out the procession of 3 Kms. There is not a single individual in the crowd of hundreds of people wearing a mask”.

The Writ petition was disposed of and the Principal Secretary, Home Dept., State of Gujarat was directed to immediately initiate an appropriate inquiry into the matter and report to be placed before this Court.

The Registry was instructed to notify the matter once again with the two reports on 27th November 2020.