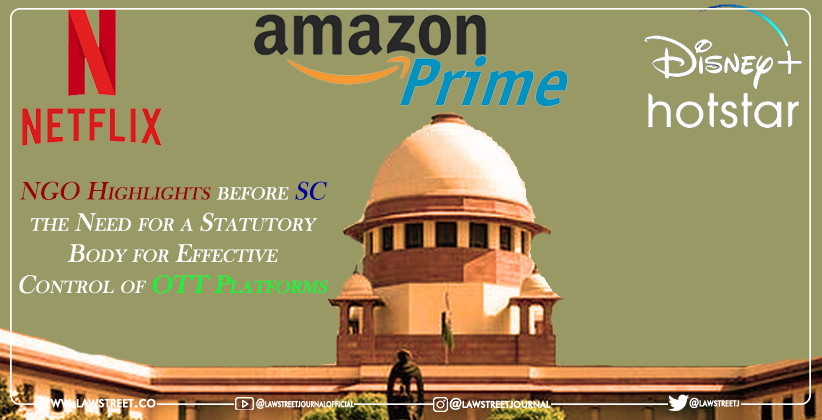 Justice for Rights Foundation, an NGO has submitted before the Supreme Court that “online web platforms need to be regulated by Statutory Body in the interest of public morality and decency.”

It filed a rejoinder affidavit with its submissions, countering the affidavit filed by the Central Government and the Ministry of Communications that pertains to regulation of content on OTT Platforms.

This plea is scheduled to be heard for Tuesday (March 23, 2021). It will be heard by the three-judge Bench of Justices Sanjiv Khanna, D.Y Chandrachud and MR Shah. They will be hearing a batch of pleas on regulation of OTT Platforms like Amazon Prime, Disney Hotstar, Netflix, etc.

It is supposed to be heard with Central Government’s transfer petition that sought transfer of cases pending in various High Courts pertaining to regulation of OTT platforms. A notice was issued last month on Centre’s plea by Justices Sanjiv Khanna and S Abdul Nazeer who then tagged it with other petitions.

The NGO has filed the rejoinder through Advocate Satyam Singh who claims that the content which is being broadcasted on these OTT Platforms is violative of various provisions of the Indian Penal Code, 1860, The Indecent Representation of Women (Prohibition) Act, 1986 along with Information Technology Act, 2000 and other applicable laws. He further stated that now with the acceptance of the fact that no laws to regulate the OTT platforms exist, it is essential to bring them under the regulatory purview.

He proposed that these must be regulated by a Statutory Body in the interest of public morality and decency. There are no reasonable restrictions on the same and this is allowing the service of non-censored and non-licensed content.

He named web series like A Suitable Boy, Mirzapur, Ak vs Ak and Tandav and alleged that they have hurt the regional, social and religious sentiments of people along with damaging the social harmony.

The Petitioner also made references to legal actions which have already been taken against some of the web series, highlighting filing of an FIR against the makers of Mirzapur and Amazon Prime Video along with the makers of ‘Tandav,’ another web series of theirs.

He further observed that 15 OTT platforms had come together under Internet and Mobile Association of India (IAMIA) to form a Regulatory Code for their self-regulation which was rejected by the Ministry of Information and Broadcasting. It further advised them to look for other mechanisms. Therefore, self-regulation hasn’t proved to be effective in this case.

Mr Singh went on to state how the Ministry is empowered by the IT Act, 2000 to disable the content for public access only in limited circumstances. Therefore, it must be noted that on the Respondent’s part, the provisions of the IT Act will not be sufficient to curb the menace of OTT Platforms that is ever, growing in today’s age. He further opined that this act has punitive measures in the nature of criminal proceedings, thereby containing no provisions that govern the general decisions pertaining to creation of content and its dissemination in the ecosystem of the digital media.

He went on to highlight that the Government paid no heed to licensing, certification and lack of a grievance portal in its affidavit and only talks about the content of OTT Platforms.

The rejoinder quoted, "The answering Respondents fell into oblivion the fact that the certification can only be provided before a particular content is broadcasted or can broadcasted and once the content has been telecasted for public display, then it does not serve any useful purpose for the public at large."

He made reference to a recent notification issued by the Government that talks about bringing the OTT Platforms under the ambit of the Ministry of Information and Broadcasting through Information Technology (Intermediary Guidelines and Digital Media Ethics Code) Rules 2021, though there is absence of an autonomous body for the same. He appreciated the effort of the Government while saying that it suffers from a lot of loopholes, flaws and defects.

He highlighted the concern of OTT and digital news media being brought within the purview of IT Act, 2000 without any legislative action. He said:

“The ability to issue rules under a statue - i. e. to frame subordinate legislation - is by its nature a limited, constrained power. When the Union Government issues subordinate rules, it is limited to substantive provisions laid out by Parliament in the original act passed by the latter - the executive branch is subordinate to what Parliament has permitted it and cannot use its rule making power to seek to issue primary legislation by itself.”

The petitioner argued on the need for screening of the content that is released on OTT Platforms and how a lot of it is vulgar and pornographic. He highlighted a report’s observations of the Supreme Court by Justice Ashok Bhushan in favour of the screening of content. This was said when a plea by Amazon Prime’s Commercial Head, against the Allahabad High Court was being heard. This was in connection to Tandav.

Singh also highlighted the lack of efficient mechanism for implementation of the newly formulated IT rules and there is no penalty or punishment provided for violation.

He went on to cite the observations made in the case of Aparna Purohit case that was related to the web series ‘Tandav,’ wherein the lack of mechanism for screening and appropriate action for violating the guidelines was thrown light upon.

The present petition is filed against the judgement of the Delhi High Court passed on February 8, 2019. It was rejected by the Bench comprising Chief Justice Rajendra Menon and Justice VK Rao after confirming from the Ministry that no license was required to be obtained from it by any OTT platforms.

The plea before the Delhi HC was mainly to seek formation of guidelines for regulating the explicit, pornographic and vulgar content broadcasted on these OTT Platforms.