No reason to seal Delhi shops on the ground of unauthorised conversion if they were originally sold as shops: SC 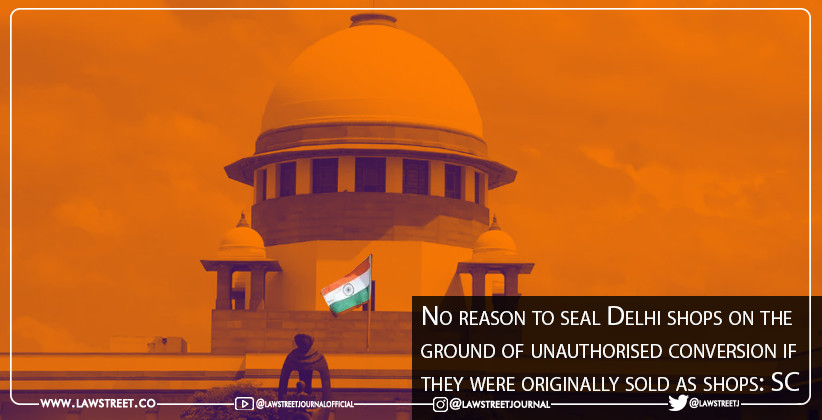 Judiciary Feb 05, 2021 Lawstreet News Network ( Editor: Ekta Joshi ) 12 Shares
12 Shares
In a possible relief to the commercial shop owners of Delhi market areas whose establishments were sealed by the Municipal Corporation for the unauthorised conversion of residential properties to commercial establishments, the Supreme Court on 3/2/2021 observed that such establishments which were originally sold as shops must be de-sealed as it affects the livelihoods of affected individuals.

These premises were sealed by the Supreme Court-appointed monitoring committee for unauthorised use. Unauthorised use of the property happens when the property which was originally purchased as residential units are unauthorizedly converted to commercial use.

The observation by the court came while considering an Interlocutory Application filed on behalf of Defence Colony Market Welfare Association. The counsel for the applicant-association informed the court that there are many shops which have been purchased by the owners for commercial use, but these have been sealed by the Monitoring Committee on the ground that there is an unauthorised and illegal diversion of the user of the shops. The counsel for the applicant was able to present before the court the Certificate of Sale that showed that the premises were original purchased as a shop. The notice for the auction held on 20.11.1957 which shows that 14 shops in Defence Colony were meant to be auctioned as shops were also presented. Based on the documents presented the court observed that:

“If it is a fact that the premises which have been sealed on the ground of unauthorised change of user from residential to commercial, was sold as a shop, we see no reason why the sealing should continue.”

However, the court also sounded caution by saying that it is important to determine which of the sealed premises were originally purchased as shops. The court further directed that a definitive list of such mistakenly sealed property be made at the earliest. Further, the court tasked A.D.N. Rao as Amicus Curiae to verify all the relevant documents regarding the original purchase of the premises. Permission was also sought and granted to the South Delhi Municipal Corporation (SDMC) to point out the original documents which are to be verified to determine the original status of the premises. In consideration of the issue of livelihoods involved in the matter court directed the Amicus Curiae submit his report to this Court within four weeks. The interlocutory application and others in the case will be considered by the court after four weeks upon receiving the report from the Amicus Curiae.