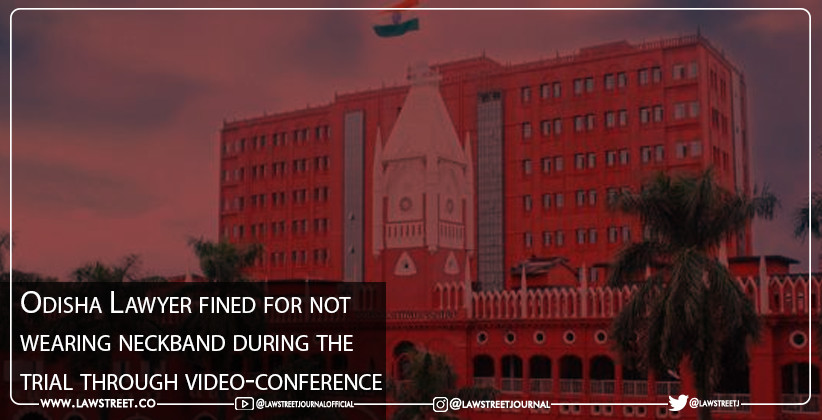 In the latest of a series of attempts by the judiciary to ensure that the court etiquettes are not compromised in the virtual mode of its functioning the Odisha High Court, last Monday, fined a lawyer Rs. 500 for not wearing a neckband during the hearing of a case.

The court observed that every profession has a dress code that helps identify the people belonging to that profession. The lawyer's dress code is governed by the Advocates Act, 1961 which makes it mandatory for lawyers to wear a black robe or coat with a white shirt and white neckband.

These rules of dress code framed under Section 49(1) (gg) of the Advocates Act, 1961 applies to all practitioners of the profession irrespective of being designated as Senior Advocates or other Advocates.

During the Covid-19 pandemic, the Supreme Court in consideration of the exigencies of the times and the virtual mode of operations has allowed relaxations in the dress code. The lawyers were allowed to wear plain white shirt/salwar kameez, plain saree with white neckband while participating in virtual court sessions. Following the Apex Court, several High Courts have also allowed such concessions in the dress code.

The High Court while passing the order observed that:

“However, the etiquette, courtier and attire are subtle indicators of erudition and professionalism especially for lawyers and this strongly influences people's perception of the profession. The profession is solemn and its profundity is complemented by its attire. Being an Advocate, he is expected to appear before the Court in a dignified manner with proper dress, even if it is a virtual mode.”

The Court held that it must restore the dignity of the profession which also includes the dress code.

The fine is to be deposited with the Welfare Fund of High Court Bar Association and its receipt is to be submitted before the court.

Since the beginning of the virtual mode of operation of the court, there have been multiple such incidents, across the country, where courts have punished lawyers for not keeping up with the professional standards.

In the Delhi High Court also the proceedings were affected by misconduct by several advocates during virtual proceedings. The Court observed that it was "simply shocking" to see advocates arguing from the road, parks or while running up a flight of stairs. Poor internet connection of the lawyers is causing difficulties during the hearings as the advocates are not properly audible. Justice Prathiba M Singh expressed her displeasure at lawyers who were arguing from places where they were not properly audible and said that she will be forced to prevent such lawyers from attending virtual proceedings further.

Back in November, the DRT-1 Ahmedabad has imposed a fine of Rs 10,000 on a lawyer for attending the hearing from a stationed car.

Several such incidents have been reported from numerous courts across the country. The Gujarat High Court adjourned the hearing of a criminal case as the applicant-accused was seen spitting indiscriminately while being present before the court. In Karnataka High Court also an advocate arguing from his car was slapped with a fine. Even in the Supreme Court, a lawyer had to tender an apology for appearing in a T-Shirt. The Rajasthan High Court was forced to adjourn a bail plea when a counsel appeared in his undervest.

Advocates have also been reprimanded by the courts for posting screenshots of virtual court proceedings on social media accounts.