Open Category is Not a ‘Quota’ but Rather Available to All Women and Men Alike :Supreme Court [READ JUDGMENT] 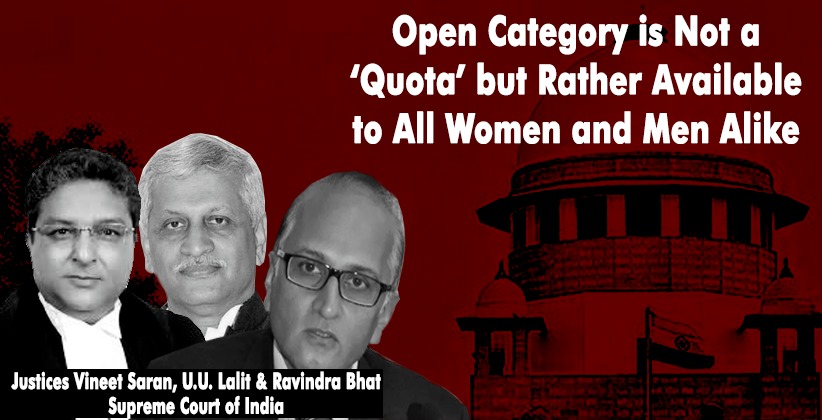 Also Read - Speculating on the outcome on a pending appeal is ‘Bordering on Professional Misconduct’ : SC [READ ORDER]

The observation was made by a bench comprising Justices U.U. Lalit, Vineet Saran and Ravindra Bhat in a Miscellaneous Application preferred by Sonam Tomar and Reeta Rani, who had participated in the selection process initiated for filling up vacancies of Uttar Pradesh Constables and secured 276.5949 and 233.1908 marks, respectively. They had applied in the female’s Other Backward Classes and Scheduled Caste category respectively. The applicants submitted that their claim has been rejected by the State government despite directions issued by the Supreme  Court in its Order dated 24.07.2019 in I.A. No.10394 of 2018 (Ashish Kumar Yadav and Others vs. State of Uttar Pradesh and Others) and that candidates with lower marks have been selected in General Female category disregarding their claim.

That Aggrieved by the action on part of the State in not considering the claim of OBC female and SC female candidates against the posts meant for General Category female candidates, this Miscellaneous Application is preferred submitting inter alia:-

“13. That a perusal of paragraph 4 of the Compliance Affidavit dated 13.11.2019 filed by the Respondent State reveals that while all Male Candidates belonging to OBC, SC, ST category securing more than the cut off marks (313.616) for the Male Candidates in the General/Open/Unreserved Category have also been selected, the same standard has not been applied to the OBC/SC/ST Women Category Candidates like the Petitioners/Applicants although they have obtained more than the cut of marks (274.8928) for the Female Candidates in the General/Open/Unreserved Category.

14. That it is respectfully submitted that 21 of the Petitioners/Applicants belonging to the Female OBC Category have secured marks more than the cut off marks for the Female (General Category) candidates declared to be selected as per the State’s Compliance Affidavit dated 13.11.2019.”

The Applicants, therefore, pray: - “(a) Allow the instant application and direct the Respondent State to select the Applicants/Petitioners herein [Female OBC/SC candidates] who participated in the 2013 Constables Recruitment Process and secured higher marks than the Cut off marks (274.8928) for the Female Candidates in the General/Open/Unreserved Category;

The controversy that arose in the present round of litigation was the correct method of filling the quota reserved for women candidates.  The applicants, who are women belonging to the Other Backward Classe and Scheduled Caste categories, complained that the state had not correctly applied the rule of reservation, and denied such OBC and SC women candidates the benefit of migration, adjustment in the general category vacancies. The quota provided for women, as well as dependents of freedom fighters and ex-servicemen, in the present case are characterized as horizontal whereas the quotas for social groups (SCs, STs, OBCs) are characterized vertical. Appearing for the Applicants, Ms. Vibha Datta Makhija and Mr. Gopal Sankaranarayanan, learned Senior Advocates, have submitted that the stand taken by the State is completely opposed to the principles laid down by this Court and that the conclusions drawn in the Orders of the High Court which are relied upon, were also incorrect. The bench observed that in Uttar Pradesh, there is no law or rule that mandates reservation for women. However, a government order was issued applicable to all posts on 26.2.1999 according to which the only stipulation with respect to treatment of horizontal reservation for women, is that in case a woman candidate is selected, she would be adjusted against the appropriate social category she belongs to (SC/ST/OBC/OC). However, there is no rule, or direction which prohibits the adjustment of socially reserved categories of women in the general category or open category. In the light of plethora of clear decisions of SC the bench observed that, it is too late in the day for the respondent state to contend that women candidates who are entitled to benefit of social category reservations, cannot fill open category vacancies. The said view is starkly exposed as misconceived, because it would result in such women candidates with less merit (in the open category) being selected, and those with more merit than such selected candidates, (in the social/vertical reservation category) being left out of selection.   The bench In conclusion judge observed that:  vertical and horizontal, are a method of ensuring representation in public services. These are not to be seen as rigid “slots”, where a candidate’s merit, which otherwise entitles her to be shown in the open general category, is foreclosed, as the consequence would be, if the state’s argument is accepted. Doing so, would result in a communal reservation, where each social category is confined within the extent of their reservation, thus negating merit. The open category is open to all, and the only condition for a candidate to be shown in it is merit, regardless of whether reservation benefit of either type is available to her or him.   [READ JUDGMENT] 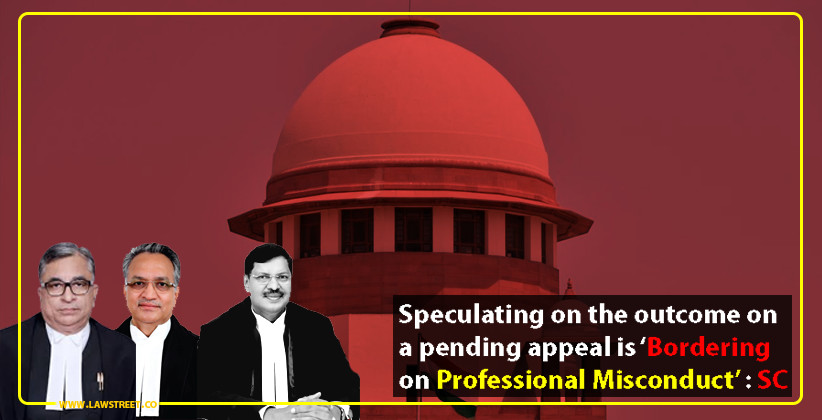 Judiciary Jan 28, 2021 ADITI AGGARWAL ( Editor: Ekta Joshi ) 2 Shares
2 Shares
In an appeal case of Madhavendra L Bhatnagar v. Bhavna Lall, the top court has pulled up a lawyer who allegedly speculated about the outcome of a pending appeal before it, in an advice to his client. The three judge bench comprising of Justices AM Khanwilkar, BR Gavai and Krishna Murari directed the party to file an affidavit and disclose the name of the the said advocate from India and said:“Prima facie, this, in our opinion, is bordering on professional misconduct and needs to be...
Read full post