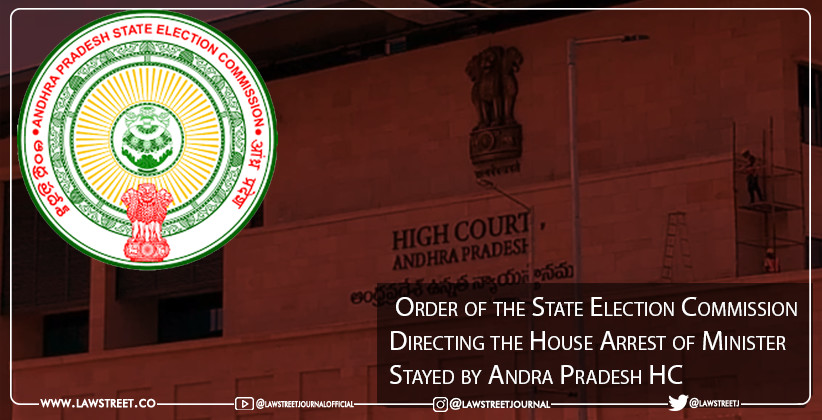 Judiciary Feb 09, 2021 Sadaf Sheikh ( Editor: Ekta Joshi ) 1 Shares
1 Share
The order of the Election Commission of the State of Andra Pradesh directing the house arrest of  P. Ramachandra Reddy who holds the State Ministry  for Panchayat Raj and Rural Development, Mines and Geology has been stayed by the Andhra High Court.

In a rare incident that occurred on the 6th February,2021,  the Andra Pradesh State  Election Commission had issued orders against the state minister,confining him in his residential homeand restraining him from speaking to the press for a period of 15 days uptill the completion of the election process that are due to conclude on 21.02.2021.

The action by the Commission came as a reaction to the controversial remarksmade by Reddy in a pressconference dated 05.02.2021. Reddy had made remarks threatening to make a list of officers of the Commission who followed its directions  during the ongoing Panchayat elections and blacklist them for the period his Government is in power  However, the order did not bar him from exercising his constitutional duties and legitimate responsibilities that his post requires from him, seek medical aid etc.

The Minister filed a petition in the State High Court challenging the impugned order . He contented that the impugned order prohibiting him from leaving his house is violative of his rights under article 14, 19 and 21 of the Constitution of India. He further contended that the alleged threats made and the conclusions in the impugned order are disproportionate and that rules of natural justice are not followed and also referred to the decision in the A.C. Josh v/s Silvan Pillai to argue that the Commission does not have the authority to override the rules and direct the postponement of the results.  On the other hand , the learned senior counsel on behalf of respondent 1 i.e. the Election Commission submitted that according to Article 243(k) of the Indian Constitution, it is the Commission that has the power of superintendence,  direction and control of preparation of electoral rolls  including the conduct of elections and it is under this power, the impugned order was issued.

Further , it is the responsibility of the Commssion to ensure free and fair elections and the remarks made by the Petitioner were threatening in nature and a clear direction to disregard the Commission. The respondent 1 also relied on the judgement given in the case of Public Interest Foundation v/s Union of India and argued that  the said order has been passed under its power of superintendence.

In the present writ petition, regarding the order of house arrest of the Petitioner, the Andra Pradesh High Court  observed that “no person can be deprived of life and personal liberty except according to procedure established by law” and held that the Commission does not have the authority to issue such an order under its power of superintendence  and control of elections and its processes.  With regard to the restraint on talking to the press, the Court observed that the statements made by the Petitioner “cannot be classified as propogation of Government policy” and were clearly an “’interference with the exercise of duties by the officers during elections”. The Court further observed that “freedom of speech is not absolute and reasonable restrictions can be placed” and in the present case, there is an underlying purpose of the restrictions so placed that was to prevent statements that would interfere with the exercise of  electoral duties by the officers. The Court relied on judgements given in the case of  Jamshed Ansari Vs.High Court of Allahabad and thecase of Bhim Singh Vs. Election Commission of India, in which the Court had upheld the importance of  the functionaries  to adopt a realistic, pragmatic approach having due regard to the ground realities. Thus,  the Andhra Pradesh High  Court upheld that part of the order restraining the Minister from engaging with the press. 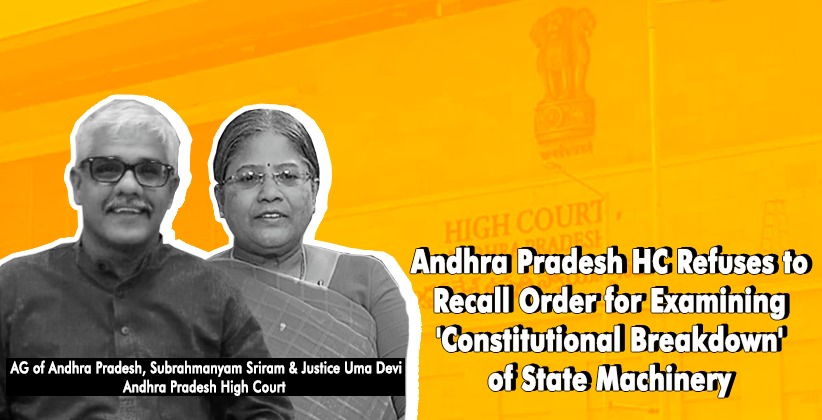 Judiciary Dec 17, 2020 Gautami Chakravarty ( Editor: Ekta Joshi ) 8 Shares
8 Shares
The Advocate General of Andhra Pradesh, Subrahmanyam Sriram, said on Monday that the State will move the Supreme Court against the October 1 order of the High Court seeking to examine whether there is a constitutional breakdown of machinery in the State. The AG had raised objection regarding the jurisdiction of the Court to deal with the question of constitutional breakdown and urged the bench to treat it as a preliminary issue. On October 1, 2020,the bench, also...
Read full post

Judiciary Oct 22, 2020 Twinkle Agarwal ( Editor: Ekta Joshi ) 13 Shares
13 Shares
The Chief Justice of India had prescribed certain guidelines to be followed by any person making allegations against judicial officers in the subordinate judiciary. To those guidelines, the Andhra Pradesh High court added some additional guidelines relating to the Pre-Requirements for filing such complaints as mentioned by the Chief Justice of India. The additional guidelines were-Anyone making a complaint against any member of the Subordinate Judiciary in the State must accompany the...
Read full post