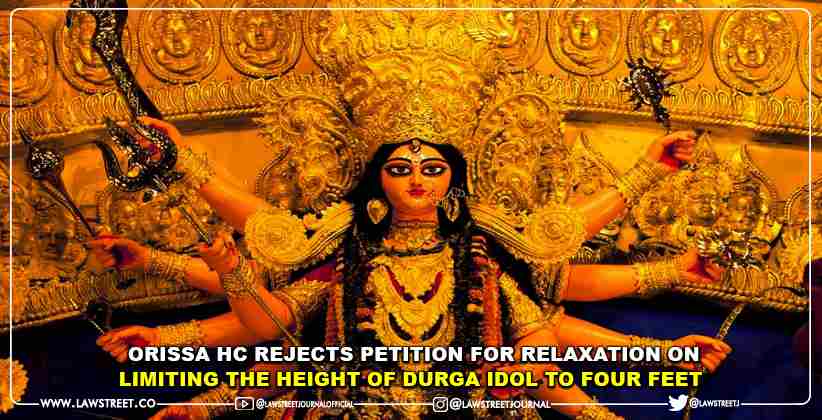 The Orissa High Court Bench consisting of Chief Justice S. Muralidhar and Justice B.P. Routray rejected the plea of the Balu Bazar Puja Committee (which is one of the oldest Durga Puja committees of Cuttack), seeking relaxation on the limitation imposed by the Odisha Government on the height of the Durga idol which is not supposed to  exceed the height of four feet.

In 2020, only four of the Durga Puja committees including the Balu Bazar Puja Committee was given the permission to use idols that were more than the height which was supposed to be maintained, in the lieu of the fact that they had already constructed the idols.

This time the court has decided not to comment on the matter on the pretext that all the organizations were notified about the restrictions from August 2021 and had four months to comply with the same.

Secondly, the Court held that even though the cases of COVID have decreased, they still exist not only in Odisha but throughout the country. Furthermore, the Court added that the possibility of an event where thousands of people would gather can act as a contagion for the disease.

Thirdly, the Court added that Durga Puja is a huge festival all over the country and is majorly celebrated in the Eastern part of the country. The Bench held that Cuttack itself has over 150 Durga Puja Samiti/organizations, there are thousands all over Odisha and their order in favour of even one Durga Puja Committee would make it difficult for the State to impose restrictions all over the state which they have curated in order to protect the state from the pandemic.

Fourthly, the Courts held that the petitioners are the only ones who have a problem with the restrictions on the idol and therefore there is not a plausible case that the restrictions are hurtful of the public sentiment or interfering with their celebration of the events.

RATIONALE OF THE COURT

The judge held that the impugned order which was passed on 9th August 2021 regarding the height of the idol was issued for all the festivals such as Ganesh Puja, the Durga Puja, the Laxmi Puja, the Kali Puja and the Kartikeswar Puja during the months of August to November 2021. The court held that these restrictions are put into place in order to ensure that the COVID does not spread.

The Court observed that the Durga Puja festival is an amalgamation of various elements and even though idol is only one of the components. The COVID protocols need to be maintained in order to ensure that the spread of the disease is controlled.

The Court also held that the height of the idol cannot be singled out as the essential aspect of the Durga puja.

The Court held that these are matters of perception of the people but other factors have to be considered in order to ensure that the health and safety of the society at large.

The Court finally dismissed the petition, allowing the impugned order dated 9th August 2021 which limits the height of the idol to not be more than four feet.