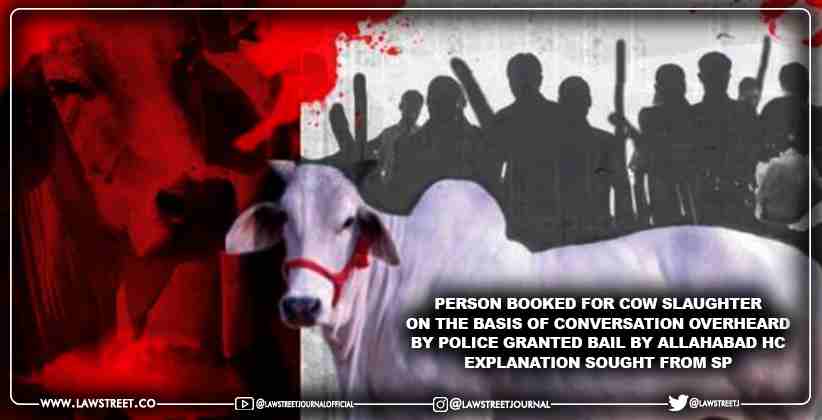 The Allahabad High Court recently granted bail to one Suraj, who was accused of slaughtering three calves and charged under the Uttar Pradesh Prevention of Cow Slaughter Act, 1995.

The First Information Report (FIR) under Sections 3 and 8 of the Cow Slaughter Act was filed when one police personnel overheard four persons including the applicant talking with each other in the bushes that they had slaughtered three calves and have received a huge amount of money and that they now have two bulls in their possession and planned to slaughter them too.

Section 3 of the U.P Prevention of Cow Slaughter Act prohibits cow slaughter. It states that no person shall slaughter or cause to be slaughtered, or offer or cause to be offered for slaughter, a cow, bull, or bullock in any place in Uttar Pradesh, anything contained in any other law for the time being in force or any usage or custom, to the contrary notwithstanding.

Section 8 of the U.P Prevention of Cow Slaughter Act provides punishment for committing the offense of cow slaughtering. It states that whoever contravenes or attempts to contravene or abets the contravention of the provisions of Section 3 or 5 shall be guilty of an offense punishable with rigorous imprisonment for a term which may extend to two years or with a fine which may extend to one thousand rupees or with both

The FIR was filed by Senior Sub Inspector Sri Deepak Kumar Pandey, the aforesaid four persons were arrested and from their possession, two bulls and instruments used in cow slaughter were recovered. The two bulls were taken into possession and sent to a shelter.

Advocate Dileep Kumar Yadav, counsel for the applicant contended that the applicant had not committed an offense under the Cow Slaughter Act, and merely because two bulls and instruments were recovered from the possession of the accused persons does not make out a case under the Act of 1955.

In reply, the Additional Government Advocate (AGA) appearing on behalf of the State submitted that the recovery of two live bulls and tools used for slaughter indicated that the applicant and others were in the process of slaughtering bulls and based on the conversation overheard by the police personnel, a clear case of cow slaughter is made out.

After hearing the contentions of both the parties, the Court came to a conclusion that no case under Sections 3 and 8 of the Act of 1995 Act has been made out.

The Court stated that Section 3 of the Act of 1995 would be attracted only when a cow, bull, or bullock is killed by any method including inflicting physical injury which in the ordinary course will cause death. The FIR does not account for any such slaughtering, maiming, or physical injury to the two bulls. A case under Section 3 and 8 of the Act of 1995 has been invoked against the applicant and the other accused based on the alleged conversation overheard by the police personnel.

The Court cited the case of State of Madhya Pradesh v. Narayan Singh [1989 (3) SCC 596] wherein the Supreme Court ruled that in the commission of an offense, there are four stages namely intention, preparation, attempt, and execution. The first two stages would not attract culpability but the third and fourth stages would certainly attract culpability.

The Court also cited the case of Parasram Ji v. Imtiaz [AIR 1962 ALL 22] wherein this Court had held that mere preparation for the slaughter of an animal is not an offense under the Prevention of Cow Slaughter Act of 1995.

The Court stated that from a perusal of the FIR it was prima facie apparent that Sections 3 and 8 of the Prevention of Cow Slaughter Act had been wrongly invoked against the applicant.

The Court then ordered that the applicant be released on bail, subject to certain conditions.

The Court would have parted with the case after allowing the application for bail but considering the peculiar circumstances of the case, the Court directed Superintendent of Police, Sitapur to file within two weeks, his affidavit specifically adverting to the averments made in the bail application as well as indicating as to how the cognizance of Sections 3 and 8 of the Act, 1955 have been invoked against the applicant.