No PIL can be dismissed simply because the Petitioner belongs to a rival Political Party : SC [READ ORDER] 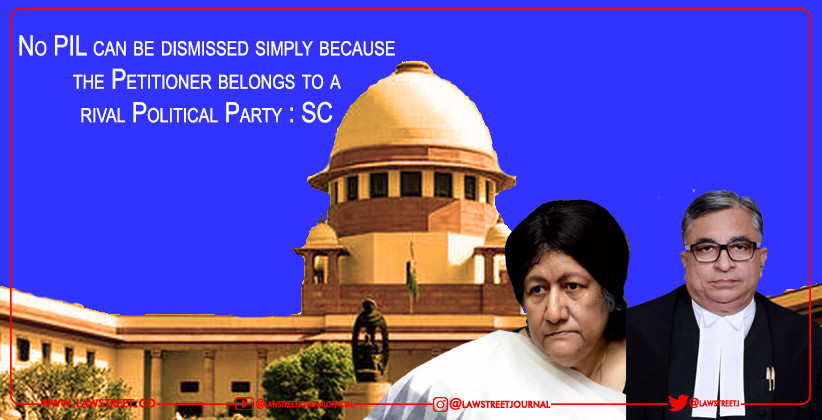 Judiciary Apr 02, 2021 Snehal Khemka ( Editor: Ekta Joshi ) 29 Shares
29 Shares
On Friday, March 26, 2021 the Supreme Court granted interim stay on a Calcutta High Court order which revived criminal cases related to the Nandigram violence against West Bengal Chief Minister Mamta Banerjee’s election agent. It directed that no coercive steps be taken against SK Supian for two weeks. The court has observed that the persons with political affiliations are, as much entitled to file public interest litigation as any other person.

A divison bench bench comprising of Justice Indira Banerjee and Justice Krishna Murari ruled: “…since the order which affects the petitioner, herein, has been passed without hearing the petitioner, we deem it appropriate to pass an order staying the operation of the order dated 05-03-2021, only insofar as it pertains to the petitioner viz. SK Supian, for a period of two weeks till date or until further orders of the Division Bench of the High Court, whichever, is earlier”,

The High Court order came on two PILs and stayed the order of the Additional Chief Judicial Magistrate discharging Supian from the 2007 criminal case and other similar orders passed on diverse dates discharging various persons accused from criminal cases against them. The counsel for the appellant as well as West Bengal told the Supreme Court that the PILs were initiated by persons belonging to a political party—BJP—for oblique reasons and should not have been entertained.

However, the bench said: “…a Public Interest Litigation cannot be thrown out only because the petitioner belongs to a rival political party.”

At this stage, Supian’s counsel pointed out that the cases against him were withdrawn and the Public Prosecutor/Assistant Publc Prosecutor had the power to do this. The counsel for the PIL litigants, however, opposed this and said the charges against related to murder and could not have been withdrawn.

Supian in his plea alleged that his personal liberty has been prejudiced, as he was not impleaded before passing of the impugned order, and was granted no opportunity to be heard by the High Court.

On this, the SC observed:“At this stage we need not go into the question of whether the Public Prosecutor/Assistant Prosecutor concerned applied his mind to the charges against the accused persons or whether the facts and circumstances of the case warranted discharge of the accused”.   [READ ORDER]