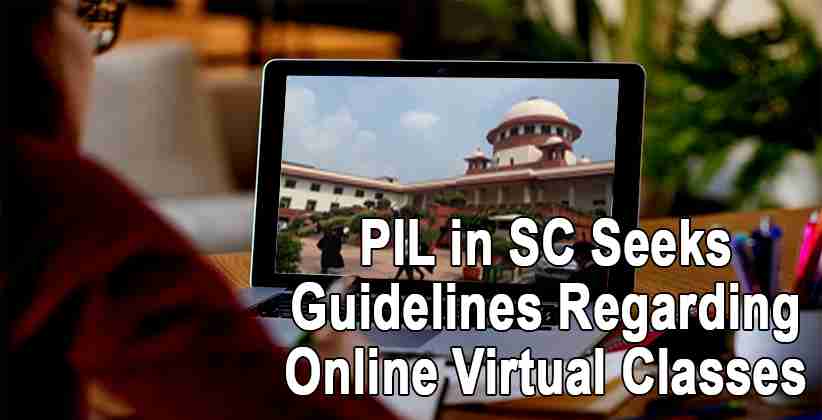 Judiciary Sep 30, 2020 Shreya Tulavi ( Editor: Ekta Joshi ) 1 Shares
1 Share
A public interest litigation (PIL) has been filed before the Supreme Court seeking a direction to the Union of India (UOI) to issue comprehensive guidelines with respect to online virtual classes through video conferencing among children as there could be a threat to them exposed to obnoxious materials available on the internet. The petition was filed by Dr. Nand Kishore Garg, through his lawyer, Shashank Deo Sudhi.

The petitioner claimed that the small children are exposed to obnoxious materials available on the internet and countless open websites which have a serious bearing on the all-rounded growth and development of the children. Sudhi sought a direction that the respondents be ordered immediately to discontinue the online classes until the formulation of comprehensive guidelines for hosting online classes in a completely encrypted and safeguarded manner. He also further sought that the guidelines should have a proper mechanism to prevent the accessibility of numerous internet-driven prohibited websites while the online classes through video conferencing in session. Sudhi further sought a direction that the respondents, including the UOI, should be directed to evolve a proper mechanism for ensuring the computer devices for the children of economically weaker section of the society who had been completely discriminated inaccessibility of online learning during the lockdown when the schools are completely closed. The petitioner had filed the present PIL out of growing concern of the vulnerability among small school children towards cyber predators and other online driven pornographic open websites which are having a serious bearing on the educational development of children. In the plea, the petitioner also stated that the present online video classes are not regulated as various highly dangerous online applications are being used to provide online education to the small children which are prone to be exploited by predacious cyber hackers.

Hence, it is highly dangerous for the small children to be exposed to the online classes without adequate online protection from vulnerability to the threat of child pornography predators, the petition said. “The sudden prevalence of online classes through video conferencing and other online applications are sending a discriminatory message to the tens of millions of EWS children who are highly deprived of being accessibility,” the petition stated. The petitioner sought appropriate direction be passed to the respondents to develop robust cyber applications on the pattern of online examination being conducted by various agencies with specified software which does not allow any other cyber application or access of internet browser or the option of popping up any other windows during the course of online examination. “The petitioner is equally concerned about the asymmetrical arrangement for online classes which are presently limited to the children of the opulent section of the society and the children of the weaker sections remain deprived of the benefits of online classes,” the PIL claimed. “There should be a broader mechanism be developed for ensuring the accessibility of the computer-driven devices or any alternate arrangement of online classes for all the excluded and marginalized children of our country to ensure that deprived children may be beneficiary of online video classes in order to cover the loss of learning during the lockdown period,” it added.