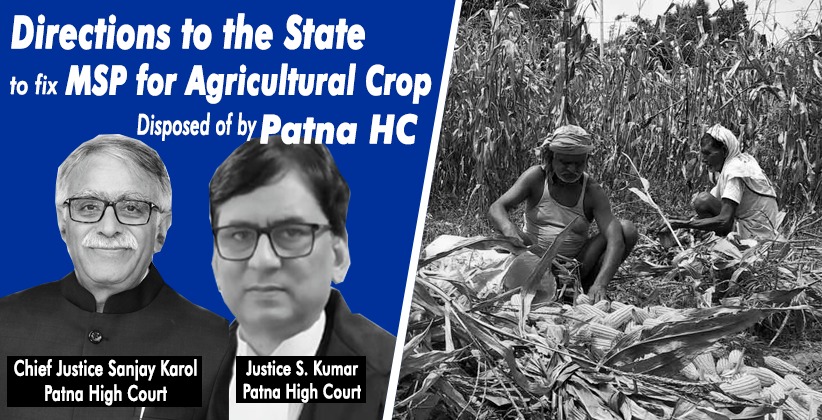 This petition was opposed by respondents no.2 (The Department of Food and Civil Supply) on the ground that procurement of a particular crop is a policy matter and since the godowns of the Food Corporation of India are likely to be filled up with another category of food-grains to be procured, any decision for fixing the Minimum Support Price would be contrary to the public interest and against the policy.

On 19th October,2020 Monday, while hearing the matter the court said that “Pricing and procurement of food-grains for the public distribution system, as also fixing Minimum Support Price is a policy decision which cannot be interfered with by the Court unless of course, such policy is arbitrary, capricious, whimsical or violative of Article 14/21 of the Constitution of India.”

The court added that the principles governing the scope of judicial review in the matter of price fixation are now well settled as follows:

On the point where statutory provision is present, the court relied on the decision of Apex Court in Union of India v.Cynamide India Ltd., (1987) where it was held that “Price fixation is neither the function nor the forte of the court”.

And on the point where statutory provision is not present the court relied on the decision of Apex Court in Rayalaseema Paper Mills Ltd. v. Govt. of A.P., (2003) where it was held that “ Where the legislature has prescribed the factors which should be taken into consideration and which should guide the determination of price, the courts would examine whether the considerations for fixing the price mentioned in the statute or the statutory order have been kept in mind while fixing the price and whether these factors have guided the determination. The courts would not go beyond that point.”

The bench of Chief Justice Sanjay Karol and Justice S. Kumar while disposing of the petition said that “The State has placed on record the revised guidelines for distribution of coarse grains, including the maize amongst the beneficiaries, termed as “Targeted Public Distribution System or MDM/ICDS Scheme”. Whether the decision is in terms of the said policy, statute, or not, we need not go into the same. “

“Nothing is brought to our notice indicating the policy or the action of the respondents to be violative of Article 14/21 of the Constitution of India. Only for the reason that this year in the State of Bihar, the crop of maize is in excess than the previous year, cannot be a reason for this Court to issue a mandamus directing the State to procure the food-grains i.e. maize under the Minimum Support Price, so fixed with respect to other items of food-grains.”, it further added.