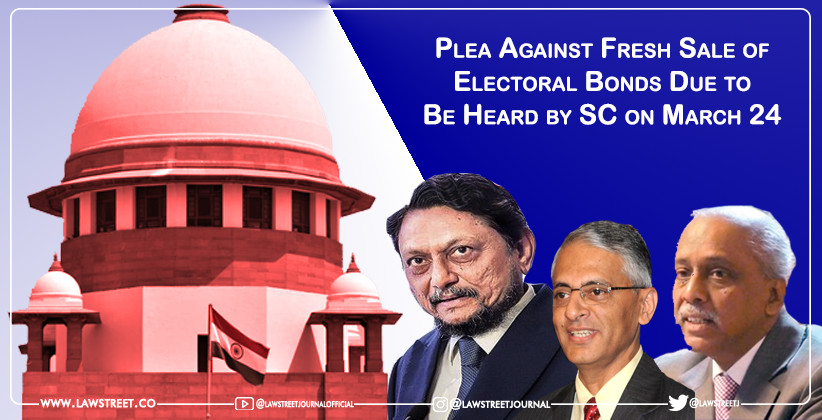 Judiciary Mar 23, 2021 Tanya Sehrawat ( Editor: Ekta Joshi ) 6 Shares
6 Shares
On March 24, 2021, Supreme Court will hear a fresh plea that strives for a direction to the Centre and others in order to not open any further window for sale of electoral bonds during the pendency of a Public Interest litigation (PIL), which pertains to the funding of the political parties apart from alleged lack of transparency in their accounts.

The matter was urgently taken note of by a Bench comprising Chief Justice SA Bobde along with Justices V. Ramasubramanian and A.S Bopanna.  The hearing of this matter has become more so important owing to assembly polls in various states including West Bengal.

The PIL was filed by an NGO, Association for Democratic Reforms. It is being represented by lawyer Prashant Bhushan who explained how the PIL had not been listed for hearing for the last two years. He further stated, Reserve Bank of India as well as Election Commission have put forward that illicit monies are being transacted that is extremely detrimental to the economy. The bonds are due for issue on April 1, 2021 and therefore, this matter needs urgent hearing.

Bhushan was questioned by the Bench to know if the plea for stay on electoral bond had earlier been rejected by the court. He denied and said that the SC had asked the political parties to submit their account statements in sealed covers to the polled panel. This has been followed by various developments, latest being that electoral bonds allow illicit money transaction.  Tushar Mehta, Solicitor General conveyed to the court that Attorney General, KK Venugopalan would appear in this case.

In the fresh plea which is due to be heard on Friday, the NGO claimed a grave apprehension that there were great chances of increase in illicit and illegal funding of the political parties through shell companies, if any further sale of electoral bonds is allowed. This has become even more significant with polls in Assam and West Bengal.

An interim stay on the 2018 Electoral Boards Scheme was refused by the Supreme Court on January 20, 2020. Along with this, it also sought responses of the Election Commission and the Centre on an interim application that was filed by the NGO that seeks stay on the same.