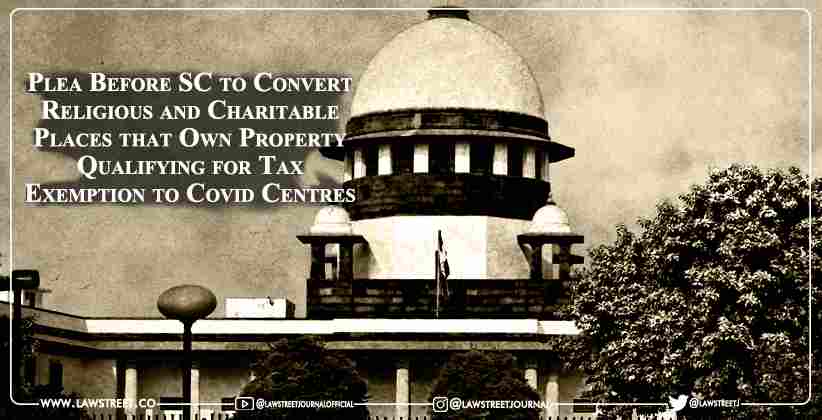 The President of the Taxpayers Association of Bharat has petitioned the Supreme Court for directions to convert religious and charitable institutions that own property qualifyin for tax benefits under Sections 12A and 80G of the Income Tax Act into covid centres.

The plea was scheduled to be heard by a three-judge bench headed by Justice Chandrachud on Monday (May 10, 2021) but it was unable to do so due to technical issues with the Court's server. Advocate Piyush Hans filed a petition seeking directions to convert religious and charitable institutions that own land, such as Ashrams, Madrassas, Gurudwaras, and churches, into COVID Care Centers under Sections 12A and 80G of the Income Tax Act, 1961.

According to the petitioner, all of their future purchases must be halted immediately, and their funds must be used to support COVID patients.

The petition asks for instructions to develop, maintain, and distribute a district-by-district dashboard / web portal for COVID patients that displays their oxygen, medicine, and hospitalisation needs, as well as to designate a district-by-district NODAL officer. The petition asks for a GST exemption on the use of necessary drugs and medications during the COVID era, as well as an invitation to other companies to produce and sell these drugs in order to save lives.

The government has been asked to declare priority in obtaining degrees and exams for those in line to become doctors and nurses who voluntarily come forward to serve COVID patients after completing a specific time in COVID / ICU, according to the petition. The Ministry of Health and Family Welfare, the Council of Nursing, and the Medical Council of India, or the appropriate body, are to be given instructions on this. The petition asks the court to intervene and issue acceptable guidelines to Media House for advertising lungs exercises and other exercises at home for at least 4 minutes per hour.

In addition, the plea has asked for instructions to establish a Call Center / BPO / Control Room in each district, or to make use of existing police control rooms, to make the best possible arrangement accessible to people. The applicant believes that data on the total number of deaths caused by COVID and other causes in the previous year should be made public, along with the cause of death.

The petition asks that the Disaster Management Act be amended to make refusal of COVID testing punishable and to compensate those who are harmed during a pandemic.

According to the petitioner, proper criteria for Covid patients must be established to determine who requires hospitalisation, who requires Covid treatment Center, and who requires home isolation. While arguing that in an ideal framework, duty and accountability are clearly fixed in the leader on the spot, the petitioner has urged the Court to hold MPs and MLAs, as well as District officers, accountable for all matters within their constituency.

According to the petition, this can be accomplished by forming various 'panchayats' of enlightened permanent residents, NGO's, academia, companies, youth, and others who will work together, transparently, to prepare the long-term growth of the Constituency by those who live and work there in these COVID times.