Breaking News
Rajasthan High Court bars taking of coercive steps against Karan Johar in the controversial case involving Hardik Pandya and KL Rahul
'Can be issued even without prior Summons': Karnataka High Court on matter of search warrant
Speculating on the outcome on a pending appeal is ‘Bordering on Professional Misconduct’ : SC [READ ORDER]
‘Pressing of child’s Breast without skin to skin contact is not the graver offence of 'sexual assault' under the POCSO Act, 2012: Bombay High Court [READ JUDGMENT]
Husband not Entitled to Seek Information Regarding Bank Details & Income Tax Returns of His Wife under RTI Act, 2005: CIC [READ ORDER]
All you need to know about the Republic Day Parade, 2021
Delhi HC shifts Caravan Defamation Case to Patiala House Court
Parliamentary Panel summons Facebook, Twitter officials on Jan 21, 2021
“It is a private app. Don't join it. Use some other app”: Delhi High Court on WhatsApp Updated Privacy Policy
Char Dham Road Project: Petitions to be listed in last week of January, 2021 as ordered by SC
SC allows Discharged Persons to travel to their home countries upon giving undertaking before the Revisional Court in Tablighi Jamaat Case [READ ORDER]
Delhi HC Orders All Subordinate Courts To Sit Physically on Alternate Day Basis [READ ORDER]
Urgent Meeting of Executive Committee Of SCBA; Know What Happened
Fine to be levied on the builder when he is unable to deliver the possession of house/flat on time: Supreme Court
Accused Has To Be Subjected To Breath Analyser or Blood Test to Attract Drunk Driving under S.185 of MV Act, 1988 : Kerala HC [READ ORDER]
11 Benches of the Delhi High Court to Conduct Physical Hearings from 18th to 20th February, 2021 [READ ORDER]
Plastic pens covered under the definition of 'plastic' under the Plastic Waste Management Rules, 2016: NGT [READ ORDER]
Resumption of Normal Supreme Court Functioning [Read Letter]
BS Mann Recuses Himself From SC-Appointed Committee on Farm Laws; says wants to stay Impartial
Know The Real Reason Why Dushyant Dave Resigned From SCBA; Faces Backlash From Legal Fraternity
Tip Off 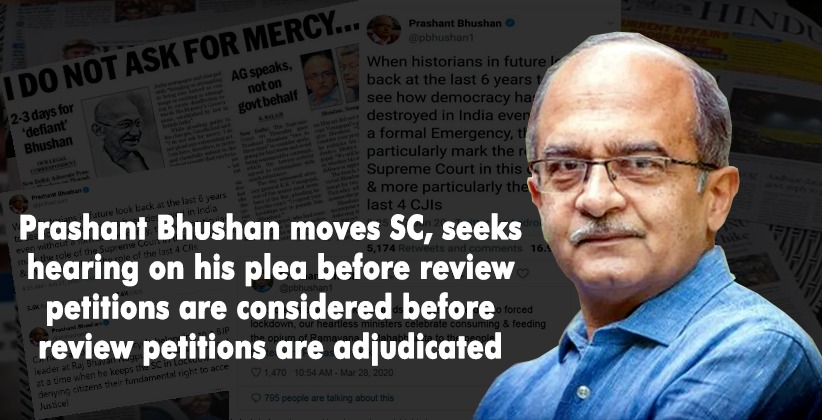 Judiciary Dec 17, 2020 Dev Kumar Patel ( Editor: Ekta Joshi ) 2 Shares
2 Shares
In his petition seeking review of the order holding him guilty for contempt of court for his two derogatory tweets against the judiciary, Prashant Bhushan has contended that it "suffers from multiple errors apparent on the face of the record of both law and of fact".

Activist-lawyer Prashant Bhushan on Tuesday ( December 15, 2020) moved the Supreme Court seeking a direction that his two pleas, in which he has sought review of the orders convicting and sentencing him for contempt of court for his tweets against the judiciary, be heard after adjudication of his separate petition raising the issue of right to appeal in such matter. The application has been moved by Bhushan, a day before a three-judge bench headed by Justice A M Khanwilkar is scheduled to consider in-chamber on Wednesday (December 16, 2020) his two petitions seeking review of the apex court’s orders by which he was convicted and sentenced in the contempt case.

The top court had on August 14, 2020, held Bhushan guilty of criminal contempt for his two contemptuous tweets against the judiciary, saying they cannot be said to be a fair criticism of the functioning of the judiciary made in the public interest. Later, the apex court had on August 31, 2020, sentenced him to either pay nominal fine of Re 1 or face a three-month jail term and debarment from law practice for three years in the case. Bhushan, who has already deposited Re 1 as fine with the apex court’s registry on September 14, 2020, has filed two separate review petitions in the case. After the apex court’s orders in the contempt case, Bhushan had filed a separate petition on September 12 seeking directions including that person convicted for criminal contempt by top court, including him, would have a right to an intra-court appeal to be heard by a larger and different bench. In his application filed through advocate Kamini Jaiswal on Tuesday, Bhushan said that prayers made in the September 12 petition have “a direct bearing” on the review petitions filed by him. He said that despite the application seeking urgent listing was filed on September 14 in the petition, the matter has not been listed before the court “whereas instant and connected review petitions have been suddenly listed for hearing on December 16, 2020”. The application said it would be in the “interest of justice” if the top court would apply its mind to the review petitions after the separate plea filed by him is heard or adjudicated upon. In his separate petition filed on September 12, Bhushan has suggested procedural changes to reduce the chances of “arbitrary, vengeful and high-handed decisions” in criminal contempt cases saying that in such cases the top court is the aggrieved party, the “prosecutor, the witness and the judge” and hence they raise fear of inherent bias. The petition has said that right of appeal is a fundamental right guaranteed under Articles 14, 19 and 21 of the Constitution of India is also guaranteed under international law i.e., Article 14(5) of International Covenant on Civil and Political Rights (ICCPR) and this would act as a “vital safeguard against wrongful conviction and would truly enable the provision of truth as a defence”. The plea, to which the Ministry of Law and Justice and the Registrar of the apex court have been made parties, has also sought a direction for framing rules and guidelines “providing for intra-court appeal against conviction in original criminal contempt cases”. Under the present statutory scheme, a person convicted for the criminal contempt has the right to file review petition against the judgement and that plea is decided in chambers by the bench usually without hearing the contemnor. Alternatively, he has sought issuance of an appropriate writ, order, or direction declaring that review of the sentencing order which imposed fine on him in the contempt case and sought “an oral hearing in an open court” on the matter. 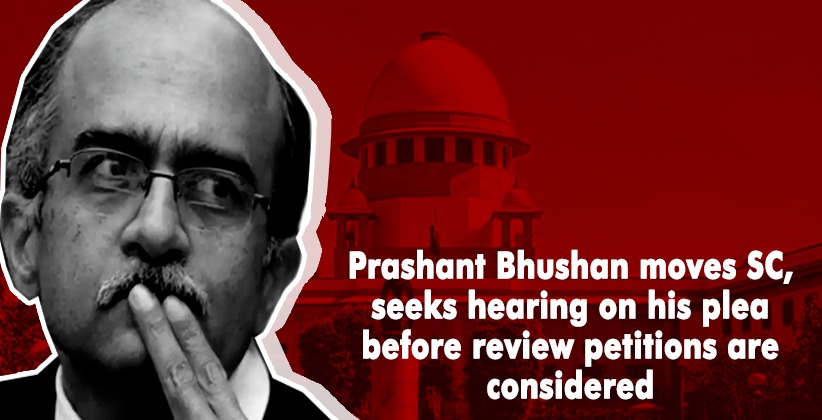