Sole Proprietorship Will Fall Under International Commercial Arbitration if Proprietor is a Habitual Resident of a Foreign Country: SC 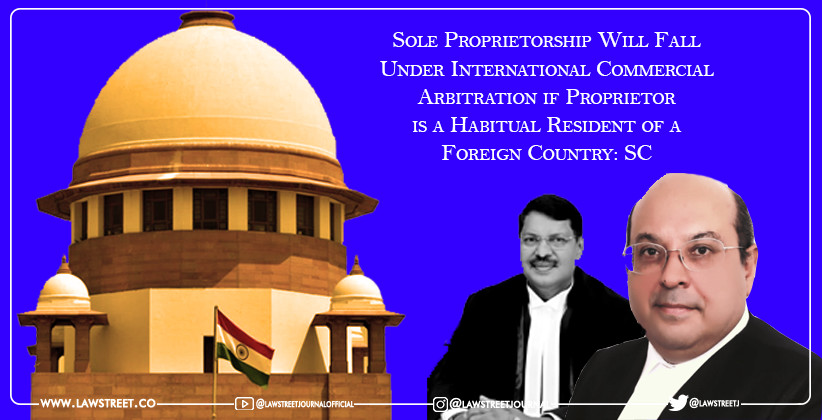 Judiciary Mar 11, 2021 Aditi Aggarwal ( Editor: Ekta Joshi ) 1 Shares
1 Share
A bench comprising Justices RF Nariman and BR Gavai of the Supreme Court has held that a sole proprietorship will fall under international commercial arbitration if the proprietor is a habitual resident of a foreign country, notwithstanding the fact that the proprietary concern is carrying out business in India.

The bench while holding this set aside an order of the Delhi High Court appointing an arbitrator in the case Amway India v. Ravindranath Rao and another and said that the HC has no jurisdiction as the dispute was an international commercial arbitration within the meaning of Section 2(1)(f) of the Arbitration and Conciliation Act, 1996.

Matter before the court:

Certain disputes which arose out of the agreement, seeking to which the respondents sought arbitration and approached the Delhi High Court for the appointment of an arbitrator under Section 11(6) of the Arbitration Act. Amway opposed the maintainability of the petition by saying that the matter was an international commercial arbitration as the respondents were habitual residents of the United State of America.   Judgment by Delhi HC:

The Delhi High Court held that since the central management and control of this association or body of individuals is exercised only in India under Section2(1)(f)(iii), the dispute is not an international commercial arbitration. Court then allowed the application by placing reliance on the SC precedent in Larsen & Toubro Ltd - SCOMI Engineering Bhd v. MMRDA.

Judgment by SC:   The Supreme Court held that the if the issue was covered under Section 2(1)(f)(i) of the Act, it was not necessary to go to Section 2(1)(f)(iii). In other words, if "at least one of the parties" was a habitual resident of a foreign nation, itwill be an international commercial arbitration, regardless of the applicability of Section 2(1)(f)(iii).
Referring to the documentary evidence in the case, the Court noted that the sole proprietorship was constituted with the husband as the “primary applicant” and the wife as the "co-applicant". :

It was also held that Larsen and Toubro was not applicable in the present case as it was a case where the Court held a consortium of companies to be compared under Section 2(1)(f)(iii).

“This case is distinguishable on facts, inasmuch as a final judgment between the parties made it clear that it would not be open for the consortium to rely upon their status as independent entities while dealing with MMRDA. This being the case, the consortium was held to be an association of persons falling under Section 2(1)(f)(iii), and that since the lead member is to lead arbitral proceedings, the central management and control of the consortium being exercised by Larsen and Toubro in India, it was held that Section 2(1)(f)(iii) would not be attracted on the facts of that case,” the bench observed.

It was thus held that Delhi High Court had no jurisdiction to appoint an arbitrator in this case as it was an international commercial arbitration.   It is to be noted that even though Ms. Manmeet Arora, counsel appearing on behalf of the respondents requested the Court to appoint an arbitrator in the case by invoking special powers under Article 142 of the Constitution, the Court refused saying that the “drill” under Section 11(6) read with 11(9) need to be followed.