Right to have footways in good condition is a fundamental right under Article 21: Karnataka High Court 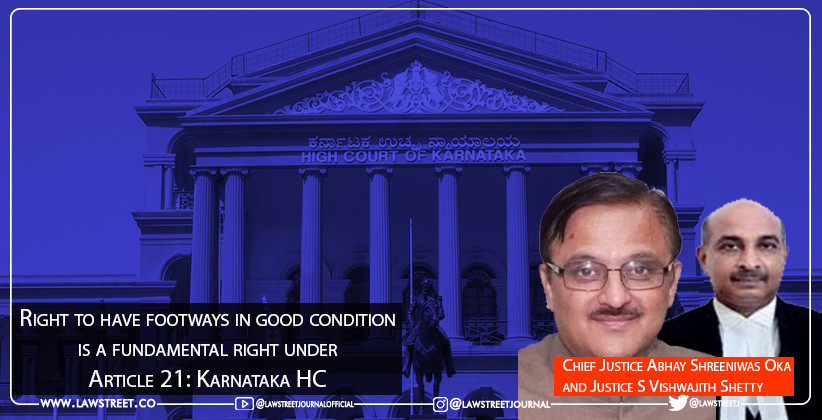 Judiciary Mar 08, 2021 Aditi Aggarwal ( Editor: Ekta Joshi ) 5 Shares
5 Shares
A Division Bench of Chief JusticeAbhay Shreeniwas Oka andJusticeS Vishwajith Shetty of the Karnataka High Court on Friday reiterated that the right to have footways in reasonably good condition is a fundamental right guaranteed under Article 21 under the Indian Constitution.

The Court made this observation while issuing notice on a petition filed by city-based organization ‘Letzkit Foundation,’ which contended that footpaths on most roads, except for some in the Central Business District (CBD) are not walker-friendly. The PIL has also accused private persons and some public authorities like the police of encroaching upon footpaths in the city.

In this regard, the plea prayed for a direction to the authorities to ensure that encroachments are removed and footpaths are made pedestrian-friendly.

The Court said in its order that:

The Court further directed Bruhat Bengaluru Mahanagara Palike (BBMP) to take immediate action against encroachments on footways in Bengaluru.  “We direct the second respondent (BBMP) to ensure that an appropriate officer visits various sites pointed out by the petitioner in this petition. If any encroachments are found on the footways, needless to add that the second respondent will take steps to remove those encroachments,” the bench said. The Court further suggested petitioner's lawyer, Advocate Puthige Ramesh to go through the Court's order passed in 2019 in which it was ruled that: Bad condition of roads and footpaths, having potholes on roads, is a violation of Fundamental Rights of Citizens, guaranteed under Article 21, of the Constitution of India. The petition will now be heard on April 15.