Home Judiciary "We Are Disappointed That You Have Not Arrived At A Consensus," Says SC To Sabarimala Advocates, Next Hearing On Feb 3
Judiciary 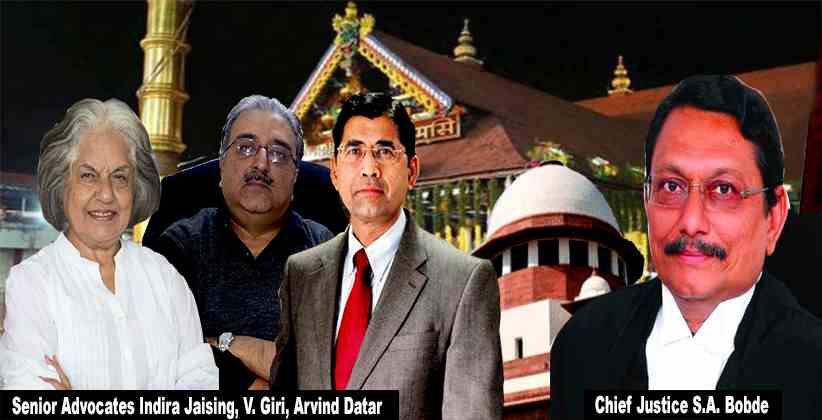 The Supreme Court on 30th January, 2020 has said that the nine-judge bench which is being set up to examine the scope of judicial review when religious faith and women’s equality are at odds, like in the Sabarimala case, will assemble on Monday (3 February, 2020) to frame issues and prepare schedules for the hearing of cases where faith and equality form the subject matter.

Chief Justice S.A. Bobde has said to Senior Advocates V. Giri, Arvind Datar, and Indira Jaising that "we are disappointed that you have not arrived at a consensus (on issues to be considered)."

The Constitution bench will pass orders with respect to the “case management", fixing timelines and other modalities related to the case on Monday, said Chief Justice Bobde.

The Supreme Court bench also comprising Justices B.R. Gavai and Surya Kant observed that the chart on the draft issues submitted by Giri will also be taken into account for consideration.

Jaising has also submitted before the bench that there were about 11 senior lawyers appearing for the petitioners and they were of the view that the court should not interfere in matters of religion. “I am a part of the few on the other side. I would need some clarification regarding which issue is being argued and by whom," said Jaising.

She asserted that there seems to be certain suggestions and recommendations that Senior Advocate Fali S. Nariman would be contending to argue on the issues of Parsi women entrants in the Towers of Silence.

When Jaising submitted that she will expound her argument on the intersection between gender and Constitution, Chief Justice Bobde said: "It will not be prudent to allow two lawyers to argue the same issue…Our objective is to try and settle issues, which will then impact the individual cases later on."

The CJI had on 28th January, 2020 fixed a 10-day period to complete the hearing of petitions seeking women’s entry to Sabarimala temple, mosques and Parsi Agiyari.

On the previous day of the hearing, Bobde had said that the bench will not decide anything on the Sabarimala review petition, which seeks to overturn the court’s order upholding the rights of women of menstruating age to enter and offer prayers at the hill shrine in Kerala. Instead, the court will deliberate affirmatively on the larger issues pertaining to the matter. "We are not hearing the review petition—only sticking to the larger issues,"  CJI Bobde devises.