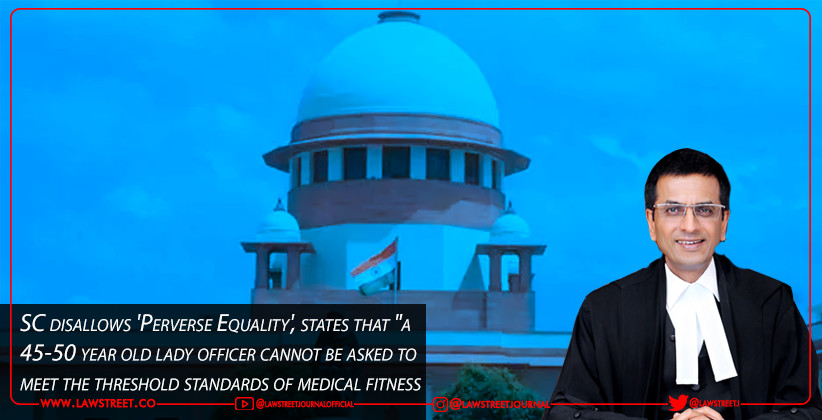 “You want to be in the Armed Forces, you have to be as fit as a man. You have to be able to move ahead shoulder-to-shoulder with your male counterparts. But there cannot be a perverse equality. A 45-50 year old lady officer cannot be asked to meet the threshold standards of medical fitness”

The Court made observations after senior counsel Ms.Arora argued, “Women biologically cannot be compared to men, and more so after 20 years of service...there has to be gender-sensitisation in the army”

Arora was fighting for the unfair and unequal treatment of lady officers who were denied Permanent Commission. Justice Chandrachud eagerly expressed, “I have a slightly nuanced opinion on this. There has to be gender equality for women in the armed forces. They have to compete equally. You want to be in the Armed Forces, you have to be as fit as a man. You have to be able to move ahead shoulder-to-shoulder with your male counterparts. While the government may grant any relaxation or exemption by way of policy, it is not open for the court to do so through judicial review”

The court went on to elaborate on the above, “They were available to be considered for PC at the age of 25-30 but they were not so considered because of the erstwhile policy of the Armed Forces. Now their (the Armed Forces) attitude seems to be, as it emerges from their affidavit, that 'you went to the Supreme Court, you put up the flag of gender equality, here is gender equality in your face, what is your grievance now'? The attitude seems to be that you wanted to be treated at par with the men, so what are you crying about now? But your argument is that today, if your male counterparts are deemed fit to continue in service, so should you. The point is that they cannot apply threshold standards to you today"

Justice Chandrachud remarked, “The theory is that the Armed Forces are for the men, for the people who can fight, and women are not fit enough for it. They are saying that now that you have got the benefit of the Supreme Court judgement, you cannot ask them to not apply the same standards to you. But that is not your argument! Your argument is that 'apply the same standards at the same point of time'...This shows a perverse mind, that is all”   Arora submitted to the Court, arguing, “They say that they have applied the very same standards to us as that of the male officers. This approach has not been thought-through, it is arbitrary and it is used as a tool to exclude women officers where they can. They have taken equality in its literal sense and not in the figurative sense.

Justice Chandrachud was quick to clarify, commenting, “No. We had meant that the lady officers should also be considered for PC alongside their male counterparts and that they should not be deprived of PC as against the male officers”.

He added, “For considering service performance, the intervening performance from the 10th to the 25th year, when you could have got PC, is not considered. No matter how many awards and honours you might have received in the intervening 15 years, no matter what service you have rendered to the nation in between! But for medical fitness, since you want PC today, so you are expected to meet the fitness of a man aged 25-30 today!... Assuming that for extension, lower parameters are acceptable, while for the grant of PC, a higher benchmark is to be met, those women who complied with the parameters at the relevant point of time for PC should at least get PC!". "Even if the person was found fit for PC, they might have been placed in the 35% as only 50% of the officers could get PC. It was not that they were not medically fit!", concurred Justice Shah. "It was because of the quota that those people could not get PC and only got an extension...The women officers who met the requirements for PC when they were considered for extension, those medical records must be available!   ASG Sanjay Jain responded saying “A wrong impression has been created before Your Lordships. We will respond or Tuesday”. To which Arora was quick to argue, “It is an extremely hard service for women to take up. Look at the dedication. The Air Force has the same position, but there as high as 95% women have been granted PC. And this was following the High Court order itself! These are women who have participated in Operations Vijay, Parakram, Rakshak! These are women who have been posted at the extremely sensitive Western zone, they have been posted at high-altitudes. They are not ordinary women. They just can't do these things today”