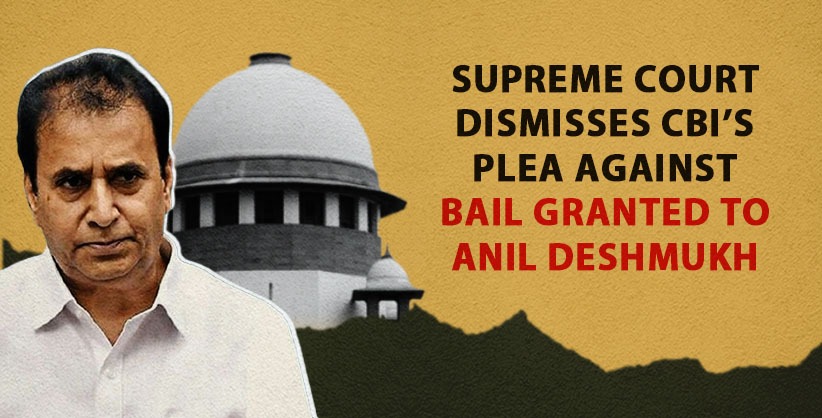 NEW DELHI: The Supreme Court on Monday declined to entertain a plea by CBI against bail granted by Bombay High Court to former Maharashtra Home Minister Anil Deshmukh in a corruption case related to collection of a monthly sum of Rs 100 crores from bar owners and illegal gratification in police transfers and postings.

"We are not interfering with the Bombay High Court's order," a bench of Chief Justice D Y Chandrachud and Justices V Ramasubramanian and J B Pardiwala said.

The court also noted that Deshmukh has been granted bail in the Prevention of Money Laundering Act case in connection with the same set of transactions.

The CBI, in its plea, claimed the High Court failed to consider that socio-economic offences needed to be viewed differently, and that the accused still holds considerable clout in the state.

It had noted that statements by dismissed cop Sachin Waze, who was co-accused in the case before he turned into an approver, lacked certainty. Waze had made a statement that an amount of Rs 1.71 crores was transferred during the months of February and March, 2021 allegedly extorted from the bar owners and handed over to Deshmukh's personal assistant.

The CBI had booked Deshmukh and his associates for alleged corruption that took place between 2019 and 2021. In April 2021, the Bombay High Court issued directions for an inquiry in response to a petition filed by Param Bir Singh, former Commissioner of Mumbai Police. The ED initiated a case of money laundering against Deshmukh and arrested him.

Singh had in a letter written to then Chief Minister Uddhav Thackeray alleged Deshmukh had instructed cops, including Waze, to collect Rs 100 crore every month from owners of bars in Mumbai.