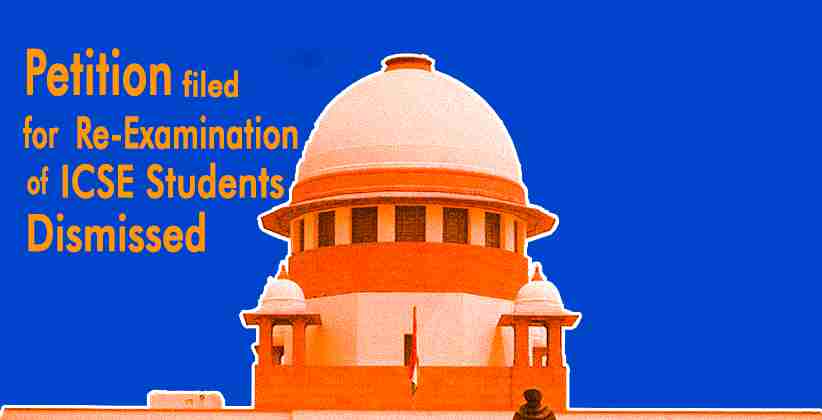 Judiciary Oct 14, 2020 VANDANA KOTHARI ( Editor: Ekta Joshi ) 2 Shares
2 Shares
In August 2020 a petition was filed in Supreme Court by a XI class student through Adv Alakh Alok Srivastava seeking re-examination for ICSE (Indian Certificate of Secondary Education) students who failed in 9th and 11th class. It was stated in the plea that if the ICSE doesn't choose the resolution adopted by the CBSE on May 13, then many 9th and 11th grade students are going to be deprived of equality as guaranteed under Article 14 of the Constitution of India.

On May 13 2020, considering the requests made by parents and students, and as a 1-time measure during an unprecedented situation, CBSE decided that every failed student of 9th and 11th standard are getting to be provided an opportunity to look during a school-based test again. It was decided that opportunities are getting to be extended to students no matter whether or not their examinations are completed and thus the exam results are released. The court then issued a notification to ICSE during a plea seeking the opportunity of re-assessment and promotion of students who failed 9th and 11th standard exams by adopting the selection given by the Central Board of education (CBSE) in view of the COVID-19 pandemic.

But recently on Tuesday 13th October, the bench of Justices AM Khanwilkar, BR Gavai, and Krishna Murari dismissed the plea after hearing the contentions made by the Adv Sandeep Devashish Das appearing for ICSE.  The court observed that “in view of the policy articulated in Chapter II of its Regulations – that no re-examination or awarding of grace marks is permissible for promotions from Class XI to Class XII, the question of issuing directions to the contrary does not arise.” The court further observed that “The Respondent-Board is free and independent to adopt its own modalities for ensuring academic standards.” The court said "Suffice it to observe that at this distance of some time, if any direction is issued to the respondent-Board it's getting to produce more students similarly placed fixing their claim for similar indulgence. which can end in impacting the tutorial year which has already commenced from June 2020 and one semester whereof is almost completed."