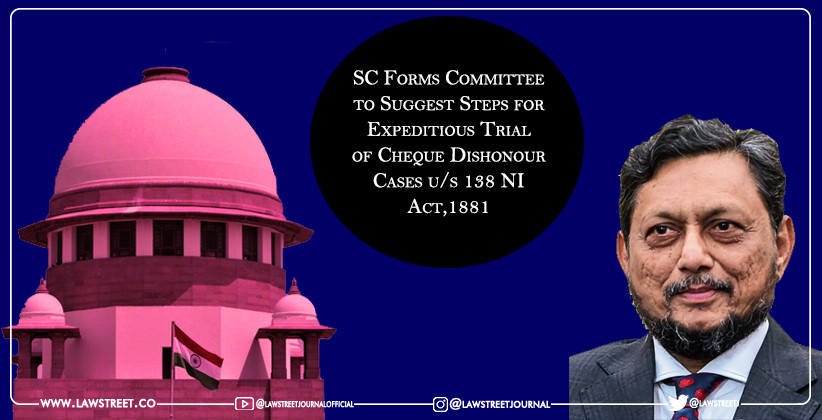 Judiciary Mar 12, 2021 Aditi Aggarwal ( Editor: Ekta Joshi ) 2 Shares
2 Shares
A Constitution Bench of the Supreme Court led by CJI Bobde has on Wednesday (March 10, 2021) directed the formation of a Committee under Chairmanship of former Bombay High Court judge ‘Justice RC Chavan’ to consider steps to be taken for expeditious disposal of cheque bounce cases under Section 138 of the Negotiable Instruments Act, 1881.

The bench found it appropriate to form a committee to consider all the suggestions made in this case and submit a report clearly specifying the steps that must be taken to facilitate an early disposal of these cases through the Country at all levels if Judiciary. The Court has asked the Union of India to provide such secretarial assistance including whole time or part time secretary to the Committee, allocate space for functioning of committee and provide for allowances that may be necessary. The Committee may also consult any expert it wishes to in the matter, and submit its report in 3 months of its first meeting.

“While suggestions received are useful and constructive, we find that they need to be worked on carefully so that the alteration and amendments to procedures don't in itself become an impediment to either Courts, the Bar or litigants,”the Court observed.

The Court has specified the Departments who would have a representation in the Committee, after receiving suggestions from the Counsels, and will pass the final order with names, after Solicitor General Tushar Mehta would submit suggested names on Centre's behalf next Friday.   According to the Court's order passed by a Bench of Chief Justice of India, SA Bobde and Justices L Nageswara Rao, BR Gavai, AS Bopanna and Ravindra Bhat, the following officers are to be included in the Committee:           Observations of the court: During the hearing, the Court observed that the present petition was initiated suo motu by the Court to consider great delays that have been occurring in disposal of cases under the NI Act.

“In turn these delays are creating lockjam in Courts at all levels particularly trial Courts and High Courts,” the Court observed

The Court further observed that various suggestions have been received from various stakeholders and the amicus curiae. The Union of India has responded positively to the suggestions of the Supreme Court for establishment of additional courts for better implementation of NI Act under Article 246 of Constitution.

“SG Mehta has appeared and stated that UOI has in principle accepted need of establishment of such Courts after modalities are worked out. We accept the said suggestion,” it has been observed.

Background: It was on March 7 last year that the bench of CJI Bobde and Justice L Nageswara Rao registered the suo moto case to devise methods for expeditious trial of Section 138 NI Act cases. A preliminary report after consulting High Courts and States has been submitted by Senior Advocates Sidharth Luthra, R Basant and Advocate K Parameshwar. They were appointed as amicus curiae in the case.